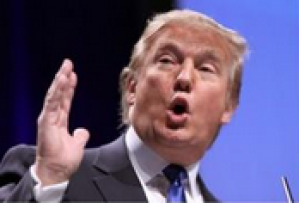 May 25, 2016 (San Diego) – Donald Trump, the presumptive Republican presidential nominee, will hold a rally at the San Diego Convention Center in San Diego this Friday, May 27th at 2 p.m.  You can register for tickets here.  The stop is one of several for Trump in California in anticipation of the June 7th primary.

The billionaire businessman and reality TV star’s visit has also sparked a counter-protest planned by San Diego County Democrats.  A “Stop Trump” rally will be held starting at 12 noon (gathering at 11:30) in the plaza at the southeast corner of the Convention Center across from the Bayfront Hilton.  You can RSVP here, sign a Stop Trump petition here  and visit a Facebook page for the event here.)

Trump is running on a slogan of “Make America Great” again has fired up a base of voters angry at the status quo and party politics as usual.  But his divisive rhetoric including hate speech targeting immigrants, Muslims, Mexicans, the disabled and women, as well as his shifting positions on many issues, have led even many prominent Republicans to refuse to endorse Trump’s candidacy.