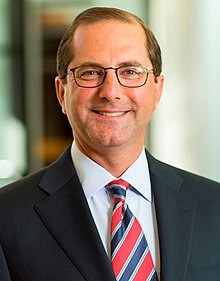 November 13, 2017 (Washington D.C.) — Alex Azar, a long-time pharmaceutical industry executive, has been appointed by President Donald Trump to serve as Secretary of the Department of Health and Human Services.

Azar served as president of Eli Lilly & Co., a drug manufacturing company, and also served on the board of directors of the Biotechnology Industry Organization, a pharmaceutical industry lobbying group.

During President George W. Bush’s administration, Azar also served as general counsel and deputy secretary at Health and Human Services, but continued working for Eli Lilly during his government tenure.

Although Trump tweeted that he views Azar as a “star for better healthcare and lower drug prices,” in fact Azar faced accusations of regularly hiking up drug prices during his tenure heading up Eli Lilly.   Earlier this year, the company was sued I Massachusetts for allegedly colluding with other drug makers to jack up prices of insulin, the New York Times reported.  Lilly also has been a leading opponent of legislation to improve transparency on drug pricing, according to CNN.

Azar has also been a harsh critic of the Affordable Care Act or ACA, also known as Obamacare.

"Mr. Azar, a drug industry lobbyist, has been a harsh critic of the ACA and has gone so far as to say that the law is 'circling the drain' despite evidence to the contrary,” Woodhouse says, adding, “In fact, the ACA is working despite President Trump and former HHS Secretary Tom Price's repeated efforts to repeal and sabotage it. Open enrollment is off to a strong start, plans remain affordable and every county in the country is covered."

But Susan DeVore, CEO of the Premier group of hospitals and healthcare providers, commended Azar’s nomination, Healthcare Informatics reports.  DeVore said that Premier worked with Azar when he served in the Bush administration on the Hospital Quality Improvement Demonstration Project.  She adds, “We know from that work he understands the need to move away from the perverse incentives in the Medicare fee-for-service payment system and to do so in a fashion that incents high quality care.  He also appreciates the need to have access to healthcare data and interoperability of health information systems. “

If Azar’s nomination is approved by the Senate, he would replace Tom Price, who stepped down as Health and Human Services secretary amid revelations that he used costly private planes and government jets instead of commercial air line service to conduct department business.

Looks like Trump appointed some to lead an agency who has knowledge of the industry it regulates. Oh wait. The liberals want someone who feels good and says caring things. Whatever that is. I go with smarts.

The agency regulates more than drug companies, it covers the entire healthcare industry. Trump could have chosen a consumer healthcare advocacy leader, or a nonprofit hospital administrator, or the head of the American Medical Association, or someone who has run a state medical regulatory agency, or promoted someone already in the U.S. Health and Human Services Department, or the head of a public health department at a major city, or someone with a degree and background in public health, to name just a few examples of people who would have knowledge about the industries being regulated.

Someone with a record of price-gouging  patients seems the worst of choices, and of the pharmaceutical companies, Eli Lilly is one of the worst on the planet in my book. They manufactured DES, a drug put on the market in the 1950s that falsely claimed to prevent miscarriages. It didn't.  Instead it caused severe birth defects in the daughters born to women who took it, causing many of them to miscarry or be left unable to have children at all. I was a DES daughter. My mother took it after having a miscarriage. I grew up not knowing if I would ever be able to have chlidren as there were no scans to diagnose this in those days. Fortunately I did not have the deformities in my womb that DES caused.   But I do not believe anyone from a company with a track record of such evil actions such be anywhere near making healthcare decisions impacting  all Americans. That is my personal view.

Wowee so NO administration ever has appointed people from industry? ALL of the have
One day you will give up on this irrational anger.

https://www.huffingtonpost.com/2012/01/04/obama-nlrb-recess-appointments... union lawyers to labor boards, no association of course

I just appointed my dog Bandit to be the head of animal control and he named his friend "Posse" possum as executive director.
Oh when will it ever end....