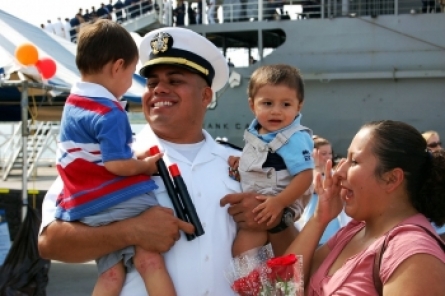 The Obama era program, called Parole in Place, prohibited deportations of undocumented immigrants if they are spouses, children or parents of active duty military personnel, unless they had been convicted of crimes.

Nathan Fletcher, a Marine Corps combat veteran and former Assemblyman, is speaking out against Trump’s action, which could rip apart families even while a U.S. soldier is deployed overseas.

In an editorial published in the San Diego Union-Tribune, Fletcher states, “The Trump administration’s draconian and hastily drafted immigration orders rescind a key protection for military families so that now even military spouses and children can be rounded up and deported. This will weaken our armed forces. It will harm thousands of military families. And it’s wrong.”

Fletcher noted that Homeland Security explained that it wanted military personnel to stay focused on their mission, not worried about family members left behind.

Fletcher concludes, “The least we can promise those willing to give their life for our country is that their immediate family members can remain in that same country.”

Trump’s policy breaks a promise made to recruits, opening the door for rounding up family members of those fighting to protect our country, or what Fletcher calls “a slap in the face to thousands of deployed troops with immigrant roots.”

San Diego is home to about 134,000 uniformed military members and Department of Defense personnel, as well as about 33,000 military families so the impact of Trump’s action in our region could have devastating effects on our armed services families.

Fletcher called on President Trump to reverse his action and fix what Fletcher calls a “terrible mistake.”