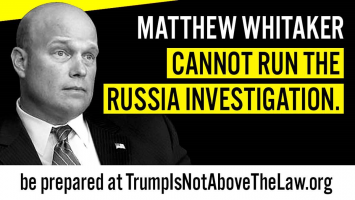 Some fear Whitaker could fire Mueller outright or take other steps to impede the investigation, such as barring Trump from being questioned under oath.

Whitaker has made clear that he will not recuse himself despite publishing multiple opinion pieces he wrote criticizing the Mueller investigation in the past. In August 2017, he even suggested that a replacement for Sessions might reduce Mueller’s budget “so low that his investigation grinds to almost a halt.”

The timing of Trump’s actions are particularly suspect given reports today in major media that Mueller is in the process of writing his final report – a report that could potentially lead to indictments of Trump and/or members of his family including his son, Donald Trump Jr. and his son-in-law, Jared Kushner over their involvement with Russians seeking to influence the outcome of the elections.

Mueller’s mandate gives him broad latitude to further investigate all crimes discovered in the course of the investigation, potentially including financial crimes involving the Trumps.

Numerous members of Trump’s campaign and cabinet and others have already been indicted in the Mueller probe including several Trump allies who have pled guilty to felony crimes.

A group called Nobody is Above the Law is organizing nationwide protests at 5 p.m. today to protest these actions, with four planned in San Diego County including downtown  at the federal courthouse (333 W. Broadway), Ramona’s Collier in East County, Westfield North County Mall and Carlsbad Premium Outlets in North County.

Concerned citizens are also asked to contact members of Congress and ask them to pass legislation to protect Robert Mueller.

Those critical of the President note that President Richard Nixon resigned under threat of impeachment after the “Saturday night massacre” in which he attempted to obstruct justice with similar firings to impede the Watergate investigation.

Trump's only criticism of Sessions has been Sessions recusal from oversight of Mueller, a decision Sessions was required to make by law, making the President's demand for Sessions' resignation even more suspect.

After a quick search on you. Joined 2 years ago, it was only to defend Trump, Fox news or seriously defame Hillary.(no bias?) Trump won, you have not contributed anything since before the 2016 election, now you are crying bias? Thanks so so much for letting us know you wont be reading anymore froglady. https://www.fairvote.org/
I never claimed not to be bias. but I DONT WRITE ARTICLES AND SEND THEM TO THE ENTIRE COMMUNITY. President Trump had a very good reason to ask for Sessions resignation, You just didn’t listen to his reason and if you did you would realize Sessions should have been upfront before accepting the job. President Trump would never have hired him. As for my distain and defamation for Hillary Clinton; she has earned everything I have ever said about her and it has been PROVEN. She stole from the White House, she used Ambassador Stevens to hide her consorting with the terrorist country and ALLOWED THE MASSACRE WHICH KILLED HIM AND THOSE TRYING TO SAVE HIM. She told those soldiers who desperately wanted to protect him, only one mile away to “Stand Down”. Then SHE AND OBAMA covered it up with a blatant lie about a video. She needs to be held accountable. She had a private UNSECURED server in her basement. SHE KNEW THAT WAS AGAINST THE LAW, after all she was the Secretary of State at the time. Not to mention the 30,000 emails she had wiped clean to hide her wrong doing. The burner cell phones she hammered into pieces. I could go on and on about her CRIMES, but you are aware of them I am sure. I want what’s best for this country. I want my grandchild to live in a free country. A country with values. PRESIDENT TRUMP has followed through with many of his campaign promises in spite of a constant fight from the LEFT. It appears you were offended by my post. I don’t wish to offend anyone. At my age I tell it like it is.

including during the email and Benghazi controversies. She's not in power and not running for anything right now. Our focus has been on the current administration.

If Trump's criteria for appointing an Attorney General was that he not recuse himself from overseeing the probe into the President, why wouldn't you be concerned about that?  This should not be a factor, unless the President is trying to control the invsetigating to avoid being implicated in crimes.  That is called obstruction of justice.  Shopping for an Attorney General to squash the investigation is illegal and an impeachable offense, just as when Nixon fired people until he found someone who would fire a special prosecutor.  That's why Congress was ready to impeach him, and so he resigned.

It should be noted that I wrote a book review in the East County Magazine very critical of the Clintons, right after I wrote a review of Hillary Clinton's "Hard Choices". "Clinton Cash" so disturbed me that I was swayed to put some balance and perspective in my view of the Clintons. Nevertheless, I looked at Hillary Clinton as the lesser of two evils between her and Donald Trump, and ended up voting for Hillary. I also wrote book reviews of Bernie Sanders in the very same news magazine, and if I was given the choice, would have voted for Bernie Sanders for President. Politics is such a nasty business!

We did indeed run reviews on books by all the major candidates including Trump, in some cases, more than one book, and these included astute and critical commmentary by Dennis on all of the books,  There are generally no saints running for president; most have done positive things but also had some negative issues in their long careeers.

Trump was an anomaly who never held pubilc office before and had a background that was largely inflated.  He ran as a billionaire businessman but had many failed businesses and what money he did make was largely on the backs of ripping off others -- thousands of lawsuits against him from contractors he never paid, for example.  He had a very abusive history toward women, too.

Well, my comment about you being an obvious democrat was right on the money. After everything Clinton has done illegally, you thought she was the lesser of two evils. Wow! I can’t believe anyone knowing full well what a crooked politician she is would vote for her over Trump. What in the world did this business man do so horrible TO THE COUNTRY, that you would think him less deserving of the presidentcy then her. Never mind, you can’t make me understand no matter how hard you try. I guess we should just end this back and forth disagreement and-say we agree to disagree. I am happy with the job our president has done thus far.
Mueller has spent the last 2 years trying to find something, ANYTHING on President Trump. Our tax dollars are being spent with nothing to show. It’s time to put this ridiculous probe to bed. It doesn’t take 2 years to dig up something unless there is nothing there. That is what bothers me and should bother all Americans.

In a large conspiracy, as with organized crime cases, it starts with taking down minor players to get them to talk, then works upward to higher and higher levels.  The Mueller probe so far has resulted in dozens of indictments and at least eight convictions, including some guilty pleas. Not a single one has been found not guilty.

Next to be indicted may well be members of the Trump family.  And I'd be willing to wager Mueller has a great deal of evidence on Trump, but you don't indict the crime family boss until you've taken down the minions below him and amassed all the evidence that you can. Two years is not an unusually long time in cases this involved.

Mueller also reportedly has numerous sealed indictments already on file with the report, likely waiting until the early cases have worked their way through the courts.

Some of the crimes for which guilty pleas ahve been obtained are the most serious of crimes including conspiracy against the United States. There are indictments against many Russians, too, including some involved with meetings with the Trump family members and campaign members over providing them with illegally obtained information with which to throw an election. But there are also financial crimes and crimes of key top cabinet members, even a National Security Director appointed by Trump. Apart form the campaign shennanigans, the bigger and most serious question is do we have a president and his family members who are beholden to a foreign power and putting Russian national interests ahead of America's?  That should concern us all, as this is arguably treason.  Perhaps you should read some of the past indictments and court documents to undertand the appalling criminality going on here with dozens of top presidential advisors and insiders, and he also has many unsavory ties to organized crime figures who may also be calling some shots.

Oh and by the way...the Watergate investigation took over two years, too, and had less entanglements than this does, since Watergate did not involve foreign powers, only two-bit burglars and a buffoonish effort to cover up the crime of breaking into Democratic party headquarters -- child's play compared to the far more serious crimes involved in what Mueller is investigating.

Trump ASKED for his resignation. I’ve read your bias articles regarding this subject and the election results. I am well aware you are clearly a Democrat and write with that slant in every article you write. What a shame. I thought this was a friendly informative venue for the citizens of El Cajon. I will not be reading anything political from you in the future. Very disappointing.

Apparently you haven't read our investigative reports that exposed many of the ethical and legal scandals involving Councilman Kalasho, who was a Democrat at the time we wrote most of the stories.

There is much in Trump's actions that mirrors the Watergate scandal, for those of us old enough to remember it or who have studied history.  Other major media outlets around the world are describing this as Sessions forced out -- he certainly didn't quit on his own to go play golf or enjoy retirement -- had he not resigned Trump was reportedly prepared to fire him.  Trump offered no legitimate reason for this.  Every  American should be concerned when a president blatantly engages in obstruction of justice to protect himself from being held accountable for crimes, which is what appears to be occurring here.