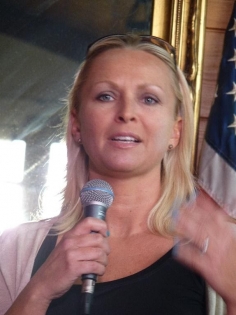 Story and photo by Miriam Raftery
December 29,2020 (San Diego) – President Donald Trump last week pardoned Margaret Hunter, one day after also issuing a pardon for her estranged husband, former Congressman Duncan D. Hunter. Both pleaded guilty to a conspiracy to misuse campaign funds for personal experience.
Neither served time in prison. Margaret Hunter had been sentenced to probation and Duncan D. Hunter’s prison term had been delayed due to COVID-19.
Hunter’s father, the senior Duncan Hunter, sought the pardon from the President. He called Margeret’s pardon “entirely appropriate,” Times of San Diego reported.
Her lawyer, Logan Smith, issued a statement reading, “Margaret Hunter accepts this unexpected pardon with gratitude and humility.”
A Polish immigrant, Margaret Hunter is reportedly living in La Mesa with the couple’s children and recently filed for divorce.

Good! Now and forever, they can never say they have not admitted to felonies. They will bear the shame for life.