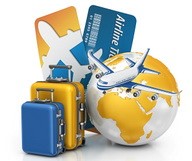 April 16, 2017 (San Diego) – The U.S. is poised to lose $7.4 billion in lost tourism dollars this year and $10.9 billion next year due to President Donald Trump’s travel ban and other policies making travelers feel unwelcome in the U.S., Tourism Economics estimates, the Washington Post reports.

Those impacts are already occurring – and San Diego could be the most hard-hit city in the nation when coupled with other Trump policies targeting immigrants, Forbes predicts.

The Washington Post, in an April 14th article, reports that major hotel chains, airlines and travel booking services are reporting huge drop-offs in travel bookings to the U.S. from every country in the world, except Russia.

Marriott reports a 30 percent drop in bookings from the Middle East and a 15 percent fall in bookings from Mexico.   Hopper, a travel-booking app, says demand for flights to the U.S. even from allies such as Ireland and New Zealand are down 35 percent.

Border cities are also hard hit, losing border crossing traffic on the ground from people who formerly came to the U.S. to shop or visit.

Forbes reported in January that Trump’s mass deportation of immigrants including undocumented workers would put San Diego “directly in the crosshairs” of the President, adding, “San Diego could well be ground zero.  From construction to tourism to hospitality, industry and labor in the city is fueled in large measure by a group of people who Trump derides as `criminals,’ ‘rapists’ or ‘bad hombres,’“ Forbes reports.

The esteemed business publication concludes, “San Diego’s economy would undoubtedly suffer a massive, sudden blow” when Trump begins deporting mass numbers of undocumented immigrant workers as he has pledged to do.

Forbes spoke with both employees and major employers in San Diego in fields ranging from agriculture to hotels to construction, under condition of anonymity. They found workers fearful of being deported and employers who admitted that a large portion of their workers are likely undocumented people with forged paperwork.

Statewide, an estimated 6.3% of California’s population is undocumented, so widespread deportations could have a ripple effect across the state, one reason why many legislators in California are touting sanctuary city or state status to try and shield undocumented workers and their families from being forced to leave the U.S.

Nationwide, the Center for American Progress conducted a study which predicted that if Trump were to carry out his campaign promise to remove all 11 million undocumented immigrants, an admittedly daunting task, that would reduce the nation’s gross domestic product by a whopping $4.7 trillion dollars a year.

At a time when the President Is wielding a budget axe to slash or eliminate many programs popular with the public, from Social Security to public education, healthcare, arts and public television, the consequences of Trump’s travel ban and deportation policies may ultimately harm many voters who supported him in 2016.

Five major polls conducted this month have found that the majority of Americans polled now disapprove of Trump’s actions as president, putting his supporters in the minority – dissent that could deepen as the huge economic impacts of his anti-immigrant and anti-tourism policies hit home in cities and town across the nation, particularly border cities such as San Diego that depend on cross-border traffic, foreign workers and tourism dollars to thrive.

Risby's right to a point of view is unquestioned. But this comment is so replete with errors that even a quick skim of the original piece suggests that the rant may have been aimed at a different article altogether. Whatever point Risby had in mind is immediately and hopelessly lost in the slosh of non sequiturs. As was any chance for informative dialogue. Instead of vacuous attacks, why not use ECM as a forum for a genuine exchange of ideas?

Help us out D S and please share the National News Sources you get your information from so we can be better informed. Thanks much!