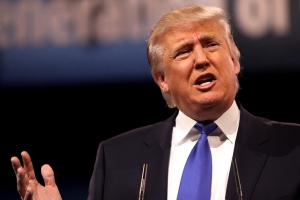 “Obstruction of justice is what it looks like to anybody who’s looking at it,” Senator Sheldon Whitehouse, a Democrat working with Republican  Senator Lindsey Graham to investigate the FBI’s role in the federal Russia investigation,  Politico reports. “This is about as lay down a case…as a prosecutor could imagine,” he added.

Republican Jason Chaffetz, chairman of the House Oversight Committee who has said he won’t seek reelection,  today announced on Twitter that his committee will “get the Comey memo, if it exists,” adding, “I need to see it sooner rather than later. I have my subpoena pen ready.”

The memo could be the "modern equivalent of the Nixon tapes" according to George Stephanopolous, an ABC news anchor and former White House communictions director under President Bill Clinton, The Hill reports.  The White House tapes led  President Richard Nixon to resign or face impeachment on grounds that included obstruction of justice, after Nixon fired special prosecutor Arcihbald Cox. The Times report indicates Trump told Comey, “I hope you can let this go,”  according to Comey’s two-page detailed memo.  Trump has denied that this occurred.

Republican Richard Burr, Chairman of the Senate Intelligence Committee, however,  called for the New York Times to publish the document.  The Times story relied on high-level sources who indicated they had seen the memo or had it read to them.

Other major media outlets are reporting that they have independently confirmed the content of the memo.

Two weeks before the meeting at which Trump reportedly asked Comey to drop the Flynn investigation, Trump had Comey to a private White Hosue dinner in which he twice asked  Comey to pledge loyalty to Trump and asked  he was under investigation,  a Comey associate has said, adding that Comey refused to do so.

Flynn was forced to resign as National Security Director after intelligence documents showed he discussed  easing sanctions with Russia’s Ambassador Sergey Kislyak in late December, but lied about having any  meeting with Russian officials during his Senate Confirmation hearing.

Trump previously fired acting attorney general Sally Yates, after she warned the White House counsel that Flynn could be subject to blackmail by the Russians  for lying in his confirmation hearing about having met with a prominent Russian official and failing to register as a foreign agent for Turkey.

A grand jury in Virginia has issued subpoenas related to the Flynn Russia ties in what could become a separate criminal investigation.

Comey has a history of writing memos after meetings on controversial matters when ethical or legal matters are at stake, the Washington Post reports.

live in a bubble all you want . logic people see the truth

Deserttrek, please enlighten us with your information sources so we too can see the light!

He's spewing propaganda touted on some extremist sites totally detached from reality. See my post below; the NY Times has won 122 Pulitzers.  It doesn't get better than that in the journalism world.

the corrupt nyt which let barryo get away with murder now spews more of its political lies and hate in order to destroy the Republic.
journalism is not copying and printing other people political hit pieces.
the national inquirer is more reliable

It has won 122 Pulitzer prizes, the top global award for reporting excellent. Here is the full list:  https://en.wikipedia.org/wiki/List_of_Pulitzer_Prizes_awarded_to_The_New...

You try to discredit one of the most respected newspapers in the world without providing a shred of evidence, spouting words like "corrupt" with zero evidence. Obama never committed "murder" or anything close. Again, you exaggerate and use hyperbole to make a totally unsubstantiated claim.

The Times' awards include a columnist awarded for hard-hitting coverage of Bill Clinton's administration, a Democrat.

They have covered many of the biggest stories of modern times in outstanding fashion. You don't win 122 Pulitzers with shoddy tabloid-style journalism, and to equate them with the National Enquirer, a celebrity hype rag,  is a major distortion of reality.

I am sick of people who don't want to believe facts about some political figure they support, so instead the attack the messengers in the media for doing their job.  Media is suppoesd to speak truth to power and investigate all administrations.