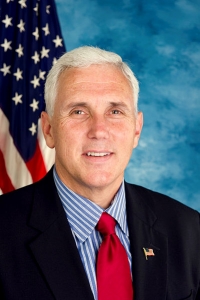 Trump hopes Pence can help him appeal to Republican Party conservatives and evangelicals who are wary of Trump, since Pence is a devout evangelical Christian.

Pence has been in public office since 2000, with the bulk of his time being spent in Congress.

Pence is most known for a controversy in Indiana that sparked outrage nationwide last year when he signed into Indiana law a religious freedom bill that extended protections to businesses that refuse services to same-sex couples.  He later amended the law, saying it wasn't to be used to discriminate against same-sex couples.

He has stirred up ire among pro-choice and abortion advocates when he signed a bill into law that made Indiana the only state in the nation to ban abortions if the fetus has a disability.

Pence, who formerly endorsed former Republican presidential candidate Ted Cruz earlier this year, switched to endorsing Trump when he won Indiana and Cruz was forced to drop out of the race later that night.

Oddly enough, Pence grew up as a Democrat and idolized John F. Kennedy.  He has been long been eyed as a potential presidential candidate as early as 2008.  He also tried to run against Republican House Speaker John Boehner for a position as House Speaker, but was defeated by House Republicans 168 to 27.

A formal announcement of the nomination will be made Friday.