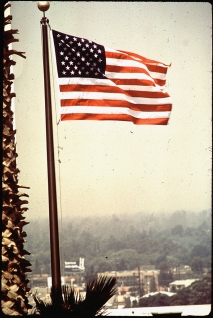 If weaker national standards are adopted and the Trump administration fights California’s long-standing waiver that allows our state to have the nation’s toughest clean air standards, it could set up an epic court battle over states’ rights.   Consumers could also be forced back to buying gas-guzzling cars, spending more to fill your tank.

Due to past serious air pollution problems in California, our state has long received waivers that have allowed California to adopt stricter vehicle emission standards than the national standard.  State officials have gone to court before to protect their right to enact tough standards to protect clean air and public health, winning a challenge against the Bush administration.

Trump says “common sense changes” are needed, yielding to pressure from the automobile industry. So, the EPA will be reopening the rule-making process for mileage standards, determining by mid-2018 whether to scrap the current standards.  A climate change denier, Trump campaigned on increasing production of fossil fuels such as oil – and now seeks to boost consumption of fossil fuels, too.

Theresa Langer, transportation program director with the American Council for an Energy-Efficient economy, says the Trump administration announced plan to backtrack on vehicle standards for model years 2022-2025 “puts at risk tens of billions of dollars of fuel savings for consumers and big reductions in tailpipe emissions.”

The EPA found in January that the Obama-era standards remain feasible and are cost effective, despite lower gas prices. That review also documented health benefits that the standards, set to mandate that passenger cars average 54 miles a gallon by 2025, would achieve.

Langer says automakers who lobbied for weaker fuel efficiency are doing their industry a disservice, since any delay in setting standards introduces uncertainty in a global marketplace where consumers want fuel efficient and low emission vehicles.

California is already moving to fight Trump’s effort.  State Attorney General Xavier Becerra has filed a legal motion Tuesday to defend California’s rules. "Any weakening or delay of the national standards will result in increased harms to our natural resources, our economy, and our people," the court filing says.

motor vehicles did NOT cause all of the la smog nor has it been the sole source of reduction. over the years the "experts" said use additives which have poisoned ground water, battery manufacturing is NOT clean and lithium is not easy to get.
sacramento needs to stop kissing the behinds of special interest groups and illegal aliens and represent The People , the citizens of the USA and California. none of the scare is real, it is a fraud and abusing to families and people in general as more oney is stolen from the People to fund the sick fantasies of politicians and celebrities. ALL government officials should ride the bus, trains, and NO air conditioning in the offices, then I might start to listen