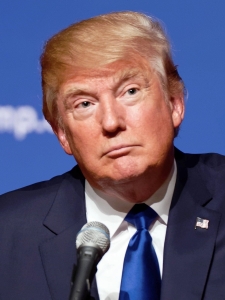 According to Cornell Law Institute, the Constitutional provision is meant to prevent corruption or external influence by foreign states.  In addition, The Foreign Gifts and Decorations Act of 1966 further lists several elected positions in its definition of "employees" who may not accept any gift of more than minimal value without Congressional approval.  That list includes the President, Vice President, and members of Congress as well as their spouses and dependents.

The President has been served with a summons in the case, The Hill reports.

The lawsuit is filed against Trump in his "official capacity and in his individual capacity," according to the Washington, D.C., radio station.  The TV station WAMU reports that the move to name Trump as a personal defendant in the suit follows the suggestion of the federal judge in the case.

The suit contends that some foreign groups are choosing to stay at Trump’s hotels to curry favor with the president, harming rival businesses.

I'm positive we will hear the outcry "FAKE NEWS!" & "LIES!" - unless of course it favors his lordship. POTUS seems to be coated with a layer of Teflon.