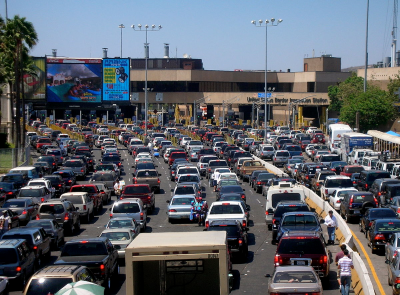 December 28, 2018 (San Diego) – As a government shutdown over a budget impasse enters its second week, President Donald Trump today threatened to shut down the entire U.S.-Mexico border indefinitely unless Congress passes a budget with billions of dollars in funding to build a border wall.

“We will be forced to close the Southern Border entirely if the Obstructionist Democrats do not give us the money to finish the Wall & also change the ridiculous immigration laws that our Country is saddled with,” Trump said in a morning tweet.

But in fact, Republicans still control both the House and Senate until January 3, when Democrats will become the majority party in the House of Representatives—and Congress adjourned for the holidays without passing the President’s budget.

The San Diego and Imperial County Chambers of Commerce estimated that a one-day border shutdown at San Ysidro, one of the world's busiest border crossings, over Thanksgiving weekend cost an estimated $5 million in lost revenues to the San Diego County economy.

An estimated 800,000 federal employees are affected by the shutdown, which affects about a quarter of the federal government. While some are furloughed without pay temporarily and can expect to receive paychecks whenever the government reopens, that’s not the case for federal contractors.  So janitors who clean federal facilities, for example, are off work indefinitely without pay, creating financial hardships for many.

Locally Cabrillo National Monument is shut down.  Restrooms within Cleveland National Forest including those on Mt. Laguna, a popular destination during winter snow, are closed, leaving visitors to use porta-potties that are reportedly overflowing or travel three miles to the nearest restroom.

If the shutdown is prolonged, the government will ultimately run out of money for benefits such as SNAP,  a program which provides food relief for the poor.

...and very short sighted it would appear. Even if a 'huge' wall is ever built to keep out certain types of people, it will not work entirely, nor solve the issue of desperate folks attempting to immigrate into the US. Right or wrong, people will continue coming here for a variety of reasons, of which most of us simply cannot comprehend. Same thoughts regarding refugees from the middle East. How many can the US absorb without creating a large financial hardship is another question entirely, and maybe that's the glaring problem that gets so many people hostile towards others wanting a better life, often through no other choice but to leave their homeland. Certainly we don't want criminal types here, yet the vast majority just want to work and live without the constant threat of violence, etc. My final thoughts: Welcome to America, much as our ancestors did. Assimilate - work hard, contribute to society in a meaningful way, don't be a burden on others. The US is a land filled with former and current immigrants, nothing has changed. This is a worldwide crisis years in the making. How can it be resolved? I have no idea. Thoughts anyone?