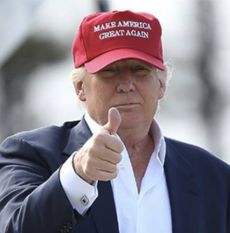 November 8, 2016 (San Diego)--In a stunning defeat for Hillary Clinton and the  Democratic Party,  business mogul/reality TV star Donald Trump is winning  key battleground states and appears likely to capture the presidency.  While there is celebration in key Republican circles, the stock market is reeling, with the Dow Jones dropping 827 points at the news.

Major networks have declared  Trump the winner in Ohio, Iowa, Florida and Pennsylvania.  As of 10:30 p.m.,  CNN projects Trump has 265 electoral votes and Clinton 215; 270 are needed to win. Of six states not yet called, Clinton leads only in Minnesota, New Hampshire and Maine—not enough to win unless Trump’s lead erodes in all of the remaining undecided states:  Arizona,  Michigan,  and Wisconsin, or unless the network's call proves wrong after all votes are counted, an unlikely scenario.

Republicans appear to have kept control of the Senate, likely by a 52-48 margin.  One small consolation to Democrats in a night of heavy defeats:  Republicans did not gain enough to block a filibuster,  giving Democrats one tool to block  a Trump-GOP  legislative agenda or potentially,  Supreme  Court or cabinet appointments.

Republicansalso  maintained solid control of the House. With a vacancy on the Supreme Court that currently has four liberals and four conservatives,  the next president will also be responsible for naming at least one and likely more Supreme Court Justices,  who serve for life.

Thus the Republican Party now has control of all three branches of government. Outside of a filibuster, there is little that Democrats can do to prevent sweeping changes in legislation and appointments to everything from cabinet positions to the Supreme Court.   Trump,  if he wins the election,  would also wield power through executive orders.

The news came as crushing disappointment to local  Democratic leaders.

“I worked so hard to get the first woman president elected,”  said  Bonnie Price of the East County Democratic Club at the group’s election night gathering at Jimmy’s Restaurant in Santee. Stunned Democrats voiced sadness and disbelief as the election returns rolled in, many denouncing “bigotry” and voicing “shame” over America choosing a leader who has spent  much of his campaign villifying immigrants and mocking all with whom he disagrees.

On social media,  some faulted the Democratic National Committee for early on backing Clinton early on over  Senator  Bernie Sanders,  a democratic socialist who drew large crowds and stunned pundits. Others raised questions over possible hacking in Ohio and voter suppression tactics in other states.  Clinton's campaign has indicated she will not yet concede, though a path to victory appears all but impossible.

Despite Trump's racially charged rhetoric and denigration of women and others, it appears his economic message resonated with many Americans.

But most of all,  voters sent a message that's rocked the foundation of both parties---demonstrating support for a political outsider who,  like Sanders in decrying income disparaity,  appealed to marginalized workers in rust belt states and elsewhere who hope Trump will make good on his promises to bring jobs back to America and restore prosperity.

Wall Street analysts seem  far less confident, however, with many predicting steeper declines in the stock market for some time, until the full impact of a  Trump presidency can be assessed.