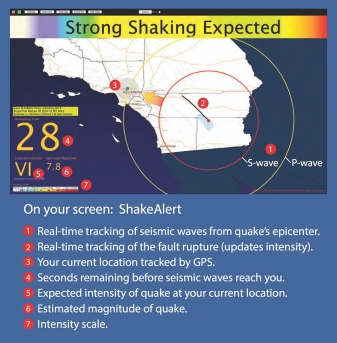 February 20, 2018 (San Diego) – Earthquake warning systems have been proven effective in Japan, Taiwan and Mexico, where residents received warnings ranging from a few seconds to a minute before major earthquakes struck.

Even a short warning can be enough to save lives at hospitals, airports, power plants, schools and other locations.

In high-rises, elevators could be shut down at the next floor to prevent people from becoming trapped. Garage doors could be opened to allow emergency vehicles to exit before a possible power outage. Trains could be slowed down to prevent derailment and planes could be delayed from landing during a quake. Power plants, oil refineries and nuclear plants could take steps to prevent explosions and fires.

Commuters could opt to stay out of tunnels and off bridges, such as one that collapsed in the 1989 Loma Prieta quake, crushing motorists.  Residents could take cover away from windows or objects that might fall. Teachers could have children take cover in schools.

The partially built ShakeAlert system would cost an estimated $38 million to finish setting up for the West Coast, plus about $16 million a year to operate and maintain. The system is poised to begin issuing alerts to the public later this year in southern California including via cell phones—but only if funding isn’t cut.

The system requires sensors to detect earthquakes where they start along fault lines, and send notifications to residents further along the fault. It measures p-waves, the first to occur, before the more damaging s-waves are transmitted, according to www.ShakeAlert.org.

But only about three-fourths of the sensors needed in California alone have been funded, and even less in Oregon and Washington.

But now President Trump’s budget proposes to cut funds to zero for the earthquake early warning system for California and other west coast states, the Los Angeles Times reports.

His plan has drawn opposition not only from Democrats, but also some Republicans – notably Congressman Ken Calvert of California, who chairs a subcommittee that oversees funding for the U.S. Geological Survey that administers the earthquake early warning program.

Representative Calvert says, “A functioning earthquake early warning system can provide critical life-saving benefits, which is why there’s broad bipartisan support to fund it in Congress.” He concludes, “This is a system the West Coast needs to have in place.”

Well, if he does not care about the earthquakes in our region, then why should we care for voting for him next time? This is a very simple equation in which he only can lose. The early warning system wont harm the budget that much but it seems like there is something else going here... Best regards...

Trump is picking on California, again. This left wing Socialist state deserves to be picked on. Why the heck should the federal government pay for any system in California when the state has so much money they are paying for legal help for illegal's. As long as this state is wasting our tax money encouraging felons to stay here illegally they better get used to keeping their hands in their pocket.

There is an Android and iOS app for your phone that senses quakes and reports them to the Berkeley Seismology Lab.
http://earthquakes.berkeley.edu/myquake/

The amount of money to complete construction and operate is not that much. The savings in damage to buildings and infrastructure would be much more. Is Trump picking on California again?

Access the entire budget at this link: https://www.whitehouse.gov/omb/budget
There's multiple, reliable news sources that discuss this issue that is clearly in TRUMPS proposed BUDGET.

Where is the evidence that President Trump pulled that item?
Where is the evidence that President Trump does not care about earthquakes?
$38 million? not a lot , lets cut spending for illegal aliens, who do kill American citizens
Congress decides funding, NOT the executive branch, I learned that in the early 1960's in the 4th grade
Article 1 section 7 & 8 of the Constitution, speaks to the powers of Congress

the anti Trump sickness is getting worse

which has many more details on this.

Thanks to "Grandfather" for also posting the link for skeptics to read the entire budget.

The president did propose these drastic cuts but Congress could potentially restore them.

Why do you name call and suggest media has an "anti Trump" sickness for reporting accurately on an element of his budget that affects millions of lives in our area?

Again there is NO evidence that the President took anything out of proposed budget. Prove he said take it out.

There is NO evidence of name calling on my part. You seem to never have a problem with jean carp insulting me or LizA and her insults. If you don't like the term illegal alien then change the federal statutes
People who are NOT citizens are ALIENS are per the statute, and they do kill more citizens every year than earthquakes and rifles combined. Also the state of California throws money away on all kinds of programs that do not benefit citizens and the state can and should pay for its own system.

(a) Improper time or place; avoidance of examination or inspection; misrepresentation and concealment of facts

Any individual who knowingly enters into a marriage for the purpose of evading any provision of the immigration laws shall be imprisoned for not more than 5 years, or fined not more than $250,000, or both.
(d) Immigration-related entrepreneurship fraud

This article on the Weather channel has links to the portion of the budget for the USGS and to the US Interior Dept's justification of the cuts to earthquake early warning system. Read it.  The cuts are in the budget that Trump is asking Congress to approve:

Any further comments suggested the proposed cuts are fake news will be deleted. Facts are facts. You can argue whether the cuts are justified or not, but not whether the Trump administration has proposed them.

As for the term undocumented immigrant vs. illegal alien, we follow the Associated Press style guide on terminology for this and evreything else, as is standard journalism practice.

Worth noting: stoping the earthquake early warning doesn't just hurt Californians. It could damage oil refineries that help supply the rest of the nation, harm tourists visiting from other states, and also harm Oregon and Washington and any visitors there.

Courts have thus far blocked some of Trump's targeting of undocumented immigrants particularly Dreamers for deportation, so whatever one thinks of the policies, the courts may ultimately uphold California on this; time will tell.

As for name calling and insults, no one should be doing that. I have on occasion amended or deleted comments from others or sent them private warnings to do so, including the individuals named above. Everyone should be respectful. If I missed a comment that violated the site rules, I apologize.

I wonder if Trump would have been so quick to make another rash decision if he lived here. Points taken away....