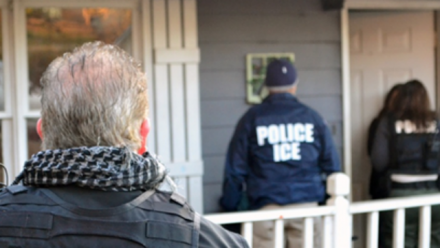 Photo:  Immigration and Customs Enforcement agents at the home of a suspected undocumented immigrant. Courtesy ICE

The cryptic tweet at 9:20 p.m. California time did not elaborate further, and the White House did not provide clarification on Tuesday morning. 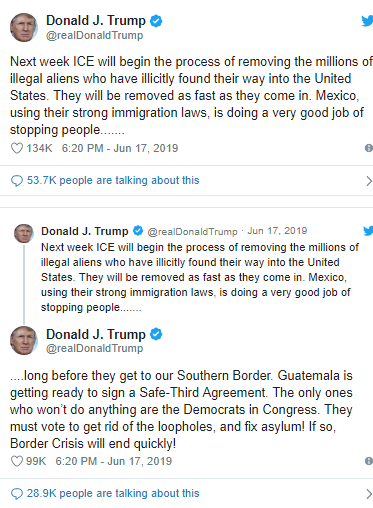 There are between 140,000 and 180,00 undocumented immigrants in the San Diego area, according to a Pew Research estimate in March.

The tweets came on the eve of the President’s planned kickoff of his 2020 elections campaign at a massive rally in Orlando.

The Washington Post reported that Trump may be referring to a plan championed by his senior immigration adviser, Stephen Miller, to arrest and remove thousands of family members whose deportation orders were expedited by the Justice Department this year under a program known as the “rocket docket.”

That's just crazy. She sounds kinda like one of the old time style preachers who instilled fear into the parishioners. Or at least attempted to anyway.
140,000 to 180,000 "Undocumented"? First the figures are way low. Second, Undocumented is a Left Democrat word for "illegal alien". There is nothing wrong about being a Democrat, or using the word "illegal" to differentiate invaders/transgressors, lawbreakers, etc. But to make this an election tactic and label it to instill fear is tacky. If there ever was any ramping up, it would be the grid locked House Democrats that take a pay check and all they do is attack the current administration. They don't deserve a paycheck! I am a registered Independent, and I vote for the person, not the party or those they have on the House floor.

adopted, which is the guidebook that virtually all major media outlets follow for consistency We use AP style guide here,too

While many undocumented likely entered illegally the term more broadly can include those who may lack documents to prove their legal status, for instance if someone was born in the U.S. at home and didn't get a birth certificate (a problem for some older immmigrants) or lost their documentation in a fire, accident or other catastrophe. In recent times, there aslo immigrants here requesting asylum, claiming they were fleeing violence.  It would be inaccurate to call them "illegal" since legally they have protected rights under international law if they presented themselves at a border checkpoint.  If they overstay and miss a court appearance, they can then be deported, but their entry status was not "illegal."

No.... we don’t want to instill any fear do we. Everything typical and routine.

Ramping up fear tactics propaganda to stir up the masses, while getting ready for election time. Another failed promise in the making? But I'm positive some people will be cheering.