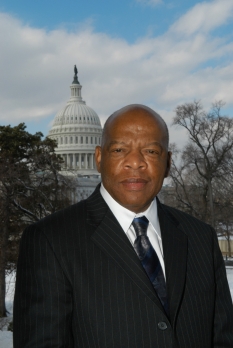 January 15, 2017 (Washington D.C.) – On the eve of the weekend when our nation honors Dr. Martin Luther King, Jr., President-Elect Donald Trump attacked one of the nation’s most respected civil rights leaders, Congressman John Lewis (D-Georgia).  His actions have drawn criticism even from prominent Republicans.

Trump, on Twitter, slammed Lewis as “all talk, talk, talk—no action or results. Sad,” also stating that Lewis should focus on his district that Trump claimed is in “horrible shape.”

Lewis fired back in a letter sent to all Democrats by the Democratic National Party, “I’ve been beaten bloody, tear-gassed, fighting for what’s right in America. I’ve marched at Selma with Dr. King. Sometimes that’s what it takes to move our country in the right direction.”

Lewis was arrested numerous times during the civil rights movement.  Recalling when “segregation was the law of the land that ordered our society in the Deep South,” he wrote that “to take a stand against this injustice, we had to be willing to sacrifice our lives for our cause.”  That took massive, organized non-violent dissent including sit-ins, stand-ins, and marches.

Those actions led to passage of laws such as the Civil Rights Act and Voting Rights Act, as well as court-ordered desegregation.

Trump’s denigration of Lewis drew harsh criticism including from Michael Steele, former Chair of the Republican National Committee. Steele, who is African-American, said this regarding Trump on MSNBC, “If you’re looking to heal and bridge, and bring people of America together…as black folks, we’re a part of that. Our expectation is, not only will you attempt that same effort that you would to white folks in other communities, but that you will show respect for our leadership, those who do represent our interest.”

Steele added pointedly, “John Lewis has a walk that very few people in this country, least of all Donald Trump, have ever walked.”

After Trump’s scathing Tweets, Lewis responded, “Some leaders reject decades of progress and want to return to the dark past, when the power of law was used to deny the freedoms protected by the Constitution, the bill of Rights, and its Amendments…We need leaders who will stand up and speak up and speak out for Americans, not someone who will work against us. Not someone who will move us backwards.  That’s why I will do everything in my power to take on injustice,” the long-time civil rights leader vowed.

Lewis and others have criticized Trump’s nomination of Alabama Senator Jeff Sessions as Attorney General, due to his history of opposing civil rights and voting rights in the past.

Trump’s criticism of Lewis was prompted after Lewis told NBC News in an interview aired Friday, “I don’t see this President-Elect as a legitimate president.“ Lewis added, “I think the Russians participated in helping this man get elected. And they helped destroy the candidacy of Hillary Clinton.”  Lewis added that for the first time in his 30 years in Congress, he will not be attending the presidential inauguration on January 20th.

Trump also Tweeted that Lewis should “spend more time on fixing and helping his district, which is in horrible shape and falling apart (not to mention crime infested) rather than falsely complaining about the election results.”   Constituents of Lewis defended their district, posting photos online of attractive homes and neighborhoods.

In addition to allegations of Russian hacking to embarrass the Clinton campaign and plant fake news stories in an attempt to sway the U.S. election, the intelligence community has briefed President  Barack Obama and President-Elect Trump on  reports provided by British intelligence suggesting the Russians may have compromising information on Trump with which they intend to blackmail him, including purported videotapes with prostitutes and documents suggesting Trump may have taken bribes as part of his business dealings in Russia.

Trump has called such allegations “lies.” But a bipartisan Senate committee has indicated it will launch an investigation.

Earlier the week, President Obama focused on the state of America’s democracy in his farewell address to the nation—and touched on racial inequality issues. “Understand, democracy does not require uniformity. Our founders argued. They quarreled. Eventually they compromised. They expected us to do the same. But they knew that democracy does require a basic sense of solidarity — the idea that for all our outward differences, we're all in this together; that we rise or fall as one.”

The President cited strides made toward racial equality and said he felt encourage by attitudes of young people.  But he warned, “…if we're going to be serious about race going forward, we need to uphold laws against discrimination — in hiring, and in housing, and in education, and in the criminal justice system. That is what our Constitution and our highest ideals require. But laws alone won't be enough. Hearts must change. It won't change overnight. Social attitudes oftentimes take generations to change.”

But President Obama concluded, “If our democracy is to work in this increasingly diverse nation, then each one of us need to try to heed the advice of a great character in American fiction — Atticus Finch — who said “You never really understand a person until you consider things from his point of view…until you climb into his skin and walk around in it.”