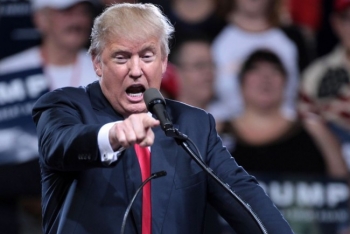 Reprinted with permission from The Moderate Voice, ,a member of the San Diego Online News Association (SDONA)

July 28, 2016 (Washington D.C.) - Republican Presidential nominee Donald Trump is now cheering on and encouraging hacking by Russian hackers increasingly — and strongly — believed by experts to be working for the Russian government to undermine Democratic Presidential nominee Hillary Clinton. Trump’s own running mate Sen. Mike Pence is distancing himself from Trump, but I’m betting Sean, Rush, and many conservative Internet writers will not repudiate it but a)defend it, b)try to change the subject, c)do a mixture of defense and changing the subject.

It’s a unique moment in American political history: the nominee of a political party cheering on hackers to not just hack into the Democratic National Committee’s emails, but into a former Secretary of State’s private emails written when she was Secretary of State.

What was that old conservative book? “None Dare Call it Treason.” This is NOT from The Onion:

Donald Trump on Wednesday said he hopes Hillary Clinton’s deleted emails have fallen into the hands of Russian hackers.

“If they hacked, they probably have her 33,000 emails. I hope they do,” Trump said at a press conference at his resort in Doral, Florida.

The Republican presidential nominee was referring to the widely held suspicion that Russia is responsible for hacking the Democratic National Committee’s servers, resulting in the leak of tens of thousands of emails just days before the party’s nominating convention in Philadelphia.

Trump said that he hoped the hackers had also accessed Clinton’s private email servers. “They probably have her 33,000 emails that she lost and deleted.”

Trump then addressed the rogue nation directly, saying “Russia, if you’re listening, I hope you’re able to find the 30,000 emails that are missing.”

By actively hoping that American servers were hacked by another nation, Trump broke an unwritten but cardinal rule of American public office: You don’t root against the United States, even when your political opponent is in power.

Regardless of party or platform, American public officials are expected to champion U.S. interests and defend U.S. national security. Trump seemed to do the opposite Wednesday.

Within moments of Trump’s press conference, his running mate, Indiana Gov. Mike Pence (R), released a statement distancing himself from the nominee’s words. “If it is Russia and they are interfering in our elections, I can assure you both parties and the United States government will ensure there are serious consequences,” Pence said.

Trump, however, doubled down on his demand for Clinton’s emails in a tweet shortly after the press conference.

Americablog’s John Aravosis has an excellent post that brings all of these strands together. Here’s the beginning of it:

There’s growing concern that Russia’s Vladimir Putin may be trying to influence the US presidential election on behalf of Donald Trump.

As the story is finally getting attention, I wanted to summarize the issue, and point you in the direction of some of the best reporting out there.

In a nutshell, it is believed that Russian intelligence broke into the computer network of the Democratic National Committee in Washington, DC, stole tens of thousands of emails over a period of a year or longer, and then had Wikileaks publish 19,000 of those emails right before the Democratic Convention in order to embarrass Democrats and help Donald Trump. It is expected that the Russians will have Wikileaks publish even more emails as the election comes closer.

But there’s a second part to the story: That Donald Trump has far too many connections to the Russians for comfort, especially in light of Trump’s bizarrely pro-Russian views on foreign policy.

There is a lot more so read Aravosis' entire post.

The amazing irony: the Republican Party now has a nominee who is cheering on a former KGB agent in hacking and hoping the Russian government find emails written by a then Secretary of State of the United States.

If GOPers let it stand, it is now fully the Trumpublican Party...

I am troubled by Clinton's emails although the FBI cleared her so accordingto the FBI and JusticeDept. no crime occurred.  We did report extensively on that issue previously. Was it a whitewash? Who knows.  Colin Powell also used a private server as Secretary of State before her, just not for allof his emails.  Hopefully she has learned from the experience and will be more transparent if elected, but time will tell.

But Trump's hair trigger temper, insulting remarks toward women and minorities, and pattern of bullying and intimidating anyone who stands up to him (such as refusing to let theWashington Post reporters into his press conferences now) are even more disturbing to me personally.  A president should be diplomatic and inclusive. He has even shown disdain for the Constitution and international law.

So while both have trust issues and more conflicts of interest than I want to see in any candidate, there are many other factors to weigh in this election.

"Trust" includes trusting someone won't launch a nuclear war or misuse the high office to engage in persecutions, personal vendettas, or trying to subvert the First Amendment freedom of the press. It means not praising dictators and denigrating allies, as Trump has repeatedly done. It means trusting someone will abide by international agremeents such as the Geneva Convention and honor human rights. It means trusting someone will respect all Americans, not ridicule a disabled reporter, suggest Mexicans are rapists, that all Muslims are terrorists, and treateing women like sex objects as he has done with women ranging from contestantsin his beauty pageants to reporters like Fox News anchor Megan Kelly when she asked him a serious question about the names he's called women through the years ("pigs" and "dogs" for instance.)  He's even insulted John McCain, a former prisoner of war.  Is that really how a president should behave?

My personal opinion, not speaking for our magazine, is that Trump is the single most dangerous political figure ever to run for the presidency. I am far from alone in that assessment. 120 Republican national security experts have signed a letter warning about the dangersTrump poses. Major newspapers from the Washington Post to the Union-Tribune have all run editorials warning of the dangers he poses to American democracy itself.  Trump's own ghostwriter has spoken out to warn how dangerous Trump really is -- and he spent a lot of time with him over the years.  The man admires Hitler for God's sake and reads a book of Hitler speeches on his bedside, his ex-wife told media and Trump did not deny it when asked. He claimed at first it was a different book by Hitler given him by a Jewish friend, but the friend confirmed to the press that he is not Jewish and the book was in fact Hitler's speeches.

How can anyone possibly vote to elect a man modeling himself after the dictator responsible for the Holocaust?  My great-grandparents were murdered in a concentration camp Hitler set up. Don't think Trump wouldn't do that if he could-- he embraces the KKK,white supremacist media,tells supporters to beat up Black Lives Matter protesters, calls Mexicans rapists, wants to deport all Muslim-Americans even U.S. citizens.  This is the rhetoric of hate and we've all seen what it can lead to.

The party insiders who are lining up behind Trump to protect their political careers remind me of the "good Germans" who supported Adolph Hitler for their own self interests.

Sometimes it is better to lose with honor than to win with dishonor.  Back in 1980 a Grand Wizard in the Ku Klux Klan won a Democratic Congressional primary right here in San Diego.  I was working as a young fresh-out-of-college staffer at the time for a Democratic Assemblyman from East County.  He did the right thing and endorsed the Republican,knowing it would be worse for our party and our nation if a racist hate-monger were to be elected. All the top Democrats urged their followersNOT to vote for Tom Metzger, the KKK candidate. Republicans should do the same here and endorse another candidate -either the Democrat or the Libertarian, or tell people to leave the top of the ticket blank, or run a write-in candidate who reflects conservative values.

Anyone who votes for Trump is endorsing racism and hate, pure and simple.  They are saying you do not care how much he hurts people of color, women, religious minorities, the disabled, etc.  And for what?  A "business leader" who has left a string of failed businesses, had an extraordinary amount of lawsuits, failed repeatedly to pay his bills ie stiffed hard working Americans, hires immigrants at low wages to work at his properties, and makes his own companies' products overseas using cheap foreign labor,robbing jobs from Americans. Why does anyone think this spoiled billionaire will do anything to help the common man?

Wow, the Democrats have absolutely no sense of humor. How in the wildest stretch of the imagination could anyone have taken this joke seriously? GET A LIFE. Your Hillary has engaged in actual criminal activity and gotten away with it yet that does not seem to bother you.