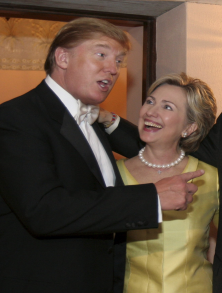 Donald Trump took South Carolina with 32% of the vote. Ted Cruz narrowly edged out Marco Rubio for second place at 22.5% to Rubio’s 22.3%.  Jeb Bush, John Kasich, and Ben Carson finished fourth, fifth and sixth respectively, each with between 7 and 8% of the vote.

After the results were in, former Florida Governor Jeb Bush announced his withdrawal from the race.

Though Trump scored a strong win on the heels of his victory in New Hampshire, he again failed to win a majority of voters.  He is polling ahead in several key upcoming primaries, but whether he can clinch the Republican nomination may hinge on whether more opponents drop out and encourage their supporters to coalesce around a single Republican competitor to Trump.

In Nevada, Hillary Clinton squeaked out a win with 53% to 47% over Bernie Sanders, fueling momentum for her campaign. Clinton previously won Iowa by the slimmest of margins but lost to Sanders in New Hampshire by a wide margin.

The Nevada Democratic Party sparked controversy over holding the caucus on a Saturday, the Sabbath, the Jewish day of rest so Orthodox Jews could not vote. The party denied a request for accommodation, though in a recent election the Republican Party did provide accommodation allowing Jews to vote after sundown.  Sanders is Jewish, raising speculation over how many votes he may have lost due to this action.

An additional controversy is swirling around the Democratic Party’s super delegates, elected officials who can cast decisive votes to decide the primary race.  The vast majority of super delegates have pledged to support Clinton – giving her over 500 delegates so far while Sanders has just 70—despite the fact that he won New Hampshire by a 22% margin, ran in a dead heat with Clinton in Iowa and lost by just 5% in Nevada, with none of those states winner-take-all.

The issue has prompted outcries from some progressive groups including MoveOn, which has launched a petition asking the Democratic National Party to instruct super delegates to support whoever wins the majority of the popular vote.