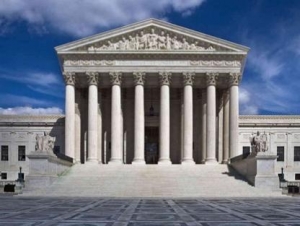 May 19, 2016 (Washington D.C.) - The death of Supreme Court Justice Antonin Scalia has left the high court split 4-4 among conservative and liberal to moderate justices.  The Republican-controlled Senate has refused to hold hearings on President Barack Obama’s nominee, Merrick Garland, a judicial moderate—or any other Obama nominee during the president’s remaining time in office.

Now likely Republican presidential nominee Donald Trump has released a list of 11 judges he says he would consider for nomination to the Supreme Court if he wins the election in November.

In addition to the current vacancy on the high court, other openings are likely to occur during the next president’s term of office due to the age of several current justices.  So the next president’s nominations and the actions of the Senate will likely have a big impact on how the laws of the land are interpreted for decades to come.

Trump’s choices are all conservatives.

Reaction has been mixed, with Senator Charles Grassley, Republican Chairman of the Judiciary Committee and the conservative Judicial Crisis Network praising some of the potential nominees as justices who would uphold the constitution.

But progressives characterized some on the list as extremists who would dismantle civil rights and liberties, as well as women’s reproductive  rights,

Trump’s nominees include six federal judges appointed by President George W. Bush and state Supreme Court justices, all conservatives. Most are not prominent in legal circles.

Some have voiced controversial opinions. For instance, Alabama Judge William Pryor has called Roe v. Wade, the Supreme Court case that legalized most abortions, “the worst abomination in the history of Constitutional Law.

Another potential nominee on Trump’s list, Don Willett of Texas, worked for the Bush White House’s office of faith-based initiatives and later the Texas government, where he fought to keep a Ten Commandments monument on public property.