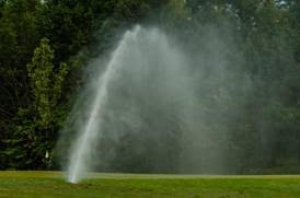 June 30, 2015 (San Diego’s East County)--A thunderstorm soaking many parts of San Diego County this afternoon means residents and businesses must turn off their irrigation systems for at least 48 hours after the rain ends. By state law, it’s illegal to irrigate landscapes during measurable rainfall and for 48 hours afterward. As a practical matter, irrigation systems can be left off for much longer after a significant rain event.

Outdoor watering accounts for more than half of a typical household’s water use in California, and it has become a focal point for water conservation efforts as the drought extends into a fourth consecutive year. The regional drought response strategy centers on decreasing ornamental landscape irrigation first to minimize the economic disruption caused by cuts to water used by industrial, commercial and farming operations. Water conserved by residents and businesses will be stored in local reservoirs in case dry conditions continue into 2016 and beyond.

California faces some of the most severe drought conditions on record, with snowpack levels in the Sierra Nevada at just 5 percent of normal on April 1. The Water Authority’s member agencies are under state mandates to reduce water use by 12 to 36 percent below 2013 levels – and a large-scale reduction in landscape irrigation following today’s storm would help water agencies meet those targets.

For information about water-use rules by community, along with details about drought conditions and conservation-related resources, go to www.whenindrought.org.

The San Diego County Water Authority is a public agency serving the San Diego region as a wholesale supplier of water from the Colorado River and Northern California.