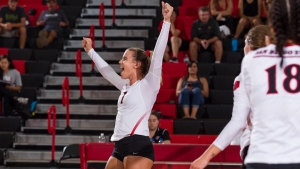 Turnlund set new career-highs in kills, with 23, and digs, with 21, to also lead all players in the match in both categories. Turnlund started off her night at a red-hot pace, converting on six of her 11 attacks in the first set to lead SDSU to a 25-20 first-set win. Turnlund recorded each of SDSU's final two kills in the opening set to provide the Aztecs with a 1-0 advantage.

With the second set tied at 24-24, Nevada held match point against the Aztecs three times before ultimately coming away with a 30-28 win. Turnlund recorded another six kills in the second set while Harris found her groove offensively, recording five kills on just eight attempts.

After hitting .329 through the first two sets, it was the Aztec defense that led the way to a third-set win, holding the Wolf Pack to a .056 hitting percentage in thanks to six Aztec blocks, including four by Harris. Sam McGrath led all players with eight third-set digs, while Loren Teter and Turnlund contributed seven and five digs, respectively.

With the third set tied at 24-24, SDSU used Delaney Taylor's sixth kill of the night and Maddie Lenn's first kill to seal a 26-24 victory.

In another game decided by the minimum margin, SDSU continued to rely on Turnlund and Harris, who posted seven and six kills in the fourth set, respectively. The third set was tied late at 23-23, Harris' 16th kill of the night gave SDSU a 24-23 lead before a Nevada attack error sealed the set at 25-23.

Harris recorded 16 kills and led all players with seven blocks, including two of the solo variety. Taylor posted a season-high six kills on just eight attempts while splitting time at setter with Gabi Peoples. The duo combined for 60 of SDSU's 69 assists in the match, with Taylor recording 29 and Peoples contributing 31. Erin Gillcrist and Victoria O'Sullivan also reached double digits in kills with both recording 10 each.

Defensively, Teter contributed 20 assists, while McGrath sat just behind with 18 of her own.

SDSU finishes the 2018 season on Saturday, hosting San Jose State for a 6:00 p.m. match at Peterson Gym. The Aztecs will honor seniors Deja Harris, Alexis Harris, and Alexandra Psoma in a pregame ceremony before the start of the match.