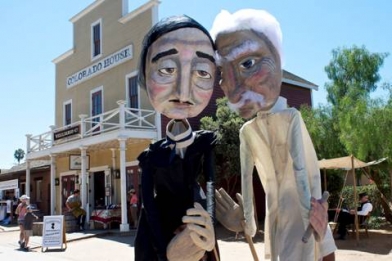 February 6, 2017 (San Diego) -- Twainfest has become an annual event in Old Town that is very popular and celebrates the literature of the 1800s.   The event has incorporated a number of organizations and individuals to create the celebration of the 1800's with foods, games, displays, re-enactments of historical writers that may be reading their work, and some California history. The popularity of this event has grown through recent years. The efforts have included paid performers and many volunteers.

The event is organized by the Theatrical Company, Write Out Loud and headed up by event director, Veronica Murphy working closely with the State Parks Department in Old Town San Diego Historical Park and concessionaires in Old Town. For several years the event has been supported by the Descendants of Early San Diego.The Descendants have provided actors, historical information, Historical Stories, and scripts for recreation of local historical people telling our local stories. These presentations have not only demonstrated local history but also told about the times here in the Greater San Diego area in the 1800's.  They have been entertaining and informative.  Issues such as the first Woman to vote in California was actually a woman posing as a man who voted before women were given the right to vote, Toys and games for kids of the period, Women gambling acceptable here but not in Mexico or the USA at the time, the cattle industry, contributions of ethnic groups not normally thought of like the Pacific Islanders who ran the hide tanneries.  Many interesting historical facts not normally thought of have been presented in the voices of people who lived here then.

Efforts are being put forward to expand the event as resources are being explored to extend the event beyond the one day.  Grants and other funding are being explored.  In consultation with the Descendants group the collaboration has also explored other ways of expanding our presentations.  Last year a writing competition in creating short scripts portraying people who had lived here was created and two winners were awarded prizes of $100.  The winners of last years contest were Victor Contreras writing about the legend of Joaquin Murrietta and Wendy Zeugschmidt who wrote about one of her ancestors and events in Old Town San Diego.

This year, the Descendants of Early San Diego and Write Out Loud have decided to put a different focus on this particular part of Twainfest.  This is not seen as a one time thing but a continual process to continue public input and celebrating people who actually lived here during the targeted period. The efforts are to request for script submissions yearly building a library of scripts that will be used to have historical presentations all day long during Twainfest. Solicitations for new script submissions will be done each year and depending on funding scripts will be accepted and compensated at $100 each.  This year we anticipate the funding two new scripts.The scripts are monologues from three to ten minutes of performance time. They are to be written in the first person as a person who actually lived here during the 1800s.

Descendants  Research Workshops, Web site, and Park resources can be accessed and are open to the public for historical research.  Dates of Workshops for 2017 to be announced on the Descendants of Early San Diego web site http://descendantsearlysandiego.weebly.com or

May 31 Deadline for submissions to be considered for compensation.  Submissions for consideration may be mailed to Victor Contreras, project coordinator at 110 N. 2nd Ave. #65, Chula Vista, Ca. 91910 or email to viccroscon@yahoo.com.  Also the complete criteria and more information on the project can be accessed at the above web sites.

Final selections will be announced at the annual Descendants Reunion Weekend, the last weekend in June and performed in August at Twainfest.