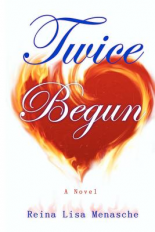 March 17, 2013 (San Diego)--Paris Jablonski has a seemingly idyllic life in San Diego with her charming French husband and young daughter.  But that illusion is shattered on her seventh anniversary, when she finds love letters in her husband’s closet from a woman in France.

Twice Begun, a novel by San Diego author Reina Menasche, opens  with this line: “Before I stepped into the closet, my life felt like an Impressionist masterpiece—filled with elusive light yet made of simple dabs of color that even a child could paint.”

But  Paris is given no opportunity to absorb the shock, caught in the moment not by her philandering husband, Serge, but by the family dog tailed closely by Paris' 7-year-old daughter, who asks innocently,  “Mommy, why are you in the closet?”

Paris, a social worker, somehow manages to maintain a veneer of calm as she drifts through an anniversary party in an emotional  fog. Before she can confront Serge, however,  she receives a call that her aged aunt has fallen and rushes off to offer aid.

Menasche  has a knack for creating memorable characters, capturing their essence in prose etched with wry humor. Take her description of her strong but aggravating great-aunt, Tanta.  Meinasche introduces her as follows:   “A World War II refugee who was smuggled out of a small Polish town in the back of hay wagon, my great-aunt survived only because the soldier who was checking the wagon stabbed his pitchfork into the wrong patch of hay. He missed her by inches, and she managed not to scream, gasp or whimper—though she has been making up for it ever since.”

Paris returns home to find a note from Serge, her husband, informing her that he has left her and gone to France to be with his childhood sweetheart, Madeline.  Stooping to a new low in caddish behavior, however, Serge also absconds with the family dog, Pumpernickel.

So Paris dries her tears and packs her bags, taking a plane to France to confront Serge, face the in-laws she’s never seen--and most importantly, snatch back the purloined pooch.

She arrives in a village that “looks like a medieval  jigsaw puzzle with a few too many pieces missing.”

Little did she suspect that her father-in-law is the town’s mayor—or that the entire family along with Serge’s mistress would be onstage at a festival in the town square.  All heads turn “like dominoes tipping” as Paris leaps onto the stage, spotting Pumpernickel  in”full rhapsodic wiggle of recognition…struggling to get the hell away from  Madeline, who looks like she wants to disinfect her hands.”

Suffice to say the end result is satisfying, as Paris attains some measure of triumph, albeit tinged with humiliation.

Arriving back home, Paris find her life becomes even more chaotic as San Diego is gripped by a raging wildfire and evacuations.

Amid the crisis she starts a new job helping recovering addicts and breaks the cardinal rule for a social worker—falling in love with a client, Dean.  After doing everything right in life, she resolves, why not try something wrong? The chemistry is irresistible as Paris starts life anew.

An aspiring author, Paris also signs up for a writers' critique group.  This is a scene I could strongly relate to, having once been in a writing critique group with Reina.  I always found her work  original and spiced with humor, so I was delighted but not surprised to learn that she is now a published author whose fiction has been recognized by the San Diego Writers and Editors Guild, the San Diego Book and Writing Awards, and the Southern California Writers Conference.

I chuckled as I read the diverse comments offered up by fictional critique group members in her novel, which ranged from the offbeat (“Why don’t you make your heroine a black belt?”) to a cringe-worthy remark. (“I liked the ex-husband personally…Why don’t you write the book about him, make him the protagonist, and his love affair the main plot of the book? Then it could take place in France instead of boring old San Diego.”)

There are autobiographical elements to Reina's work. Menasche is a masters-level social worker who teaches university classes in counseling and human services.  She has provided services to clients struggling with addiction and  life transitions, specializing in helping young children adjust to life after divorce. Currently she lives with her family in San Diego.

If you’re looking for an entertaining read that strikes a strong emotional chord, I highly recommend Twice Begun.

This book was inspired by my work in the addictions field. Sure hope the book conveys some of that inspiration!
From what I have heard of Reina Menasche's book, and by reading this excellent review, I can't wait to get my hands on this book to read it for myself.
Now that I actually have my hands on the book, I am intrigued as to what the author, Reina Menasche, means by "It All Begins In The Closet." I better get started reading!