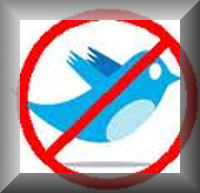 October 12, 2011 (San Diego)--Days after a formal complaint from the San Diego County Democratic Party, Twitter has suspended several accounts impersonating San Diego Democrats--along with the official page of the County Republican Party (@sdrepublicans) and that of its chair, Tony Krvaric (@TonyKrvaric).
On October 6, the general counsel for the County Democratic Party contacted Twitter to protest four accounts that purported to represent candidates for the San Diego City Council -- @SherriLightner, @ToddPhilips, @MatKostrinsky, and @MartiEmerald -- in addition to one impersonating the County Democratic Party, @sddemocrats, and its chair, @JessDurfee.
The Democrats' letter cited Twitter’s policy on this practice, which defines impersonation as “pretending to be another person or entity in order to deceive.” The policy continues: “Impersonation is a violation of the Twitter Rules and may result in permanent account suspension.”
Though Krvaric’s and the Republican Party’s accounts were not mentioned in the Democratic complaint, both were suspended today along with the fraudulent accounts -- indicating that Twitter has pinpointed the Republicans in impersonating Democrats and trying to trick their followers.
“I applaud Twitter for acting quickly to shut the deceptive profiles down,” said Democratic Party Chair Jess Durfee. “Childish and unethical conduct online is nothing new, but I am disappointed to see that my Republican counterpart and his party may have been behind it. The idea of Tony Krvaric posting as @JessDurfee is just creepy.
“From hiring a spy to shadow a Redistricting Commissioner to pouring hundreds of thousands of dollars into failed signature-gathering efforts, this has been a busy year for San Diego Republicans,” Durfee added. “Now apparently they can add Internet fraud to the list. In the meantime, Democrats have out-registered them countywide, and we’re looking forward to out-campaigning them in 2012.”

Krvaric told the San Diego Union-Tribune that his favored Twitter handle had been suspended, but said he had not yet been told the reason. He admitted to creating the bogus accounts but denied using them.

“I never tweeted as any of the council candidates,” Krvaric said, the Union-Tribune reported.  “But we have a political campaign going on and they weren’t taken. If I register it; then they can’t register it. It’s a campaign. For Marti Emerald to not register @MartiEmerald when she’s been on the council for how long? I just tried it one day and they were all available so I registered them. So what?"

Interestingly, Krvaric once claimed to have been the victim of identity theft himself when an e-mail account that appeared to be from him sent out messages trashing a local GOP candidate, as ECM previously reported:  http://www.eastcountymagazine.org/node/2820  In that instance, ECM investigated and found the IPN invalid, returning a message indicating the account had likely been spoofed.
Krvaric's ethical standards have come into question in the past, as ECM's editor reported in an investigative report revealing his past as cofounder of Fairlight, a computer game-hacking ring that grew into what Interpol described as the largest intellectual property piracy ring on the planet: Kravric’s own ethics and tactics have been called into question in the past on other issues (http://www.eastcountymagazine.org/mutiny_at_the_gop; http://www.rawstory.com/news/2008/San_Diego_GOP_chairman_cofounded_inter... http://www.rawstory.com/news/2008/San_Diego_GOP_chairman_Part_2_0430.html).
Campaigns and organizations across the political spectrum have increased their presence on Twitter in recent years, using the social networking tool to communicate with supporters, raise funds, and promote stories in the news media. The authentic Twitter handles for the impersonated Democrats in San Diego include @Kostrinsky, @MartiEmeraldD7, @SanDiegoDems, and @ChairJessDurfee.