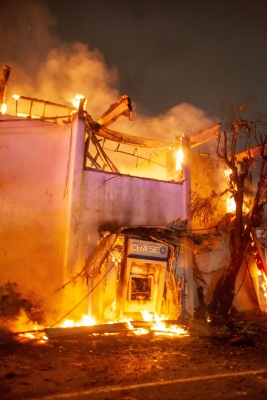 November 3, 2020 (La Mesa) - – Two men are in custody, charged with arson and looting, in connection with destructive fires intentionally set in La Mesa during a protest that turned violent in May.

On May 30, 2020, an arson was set at the Chase Bank located at 4791 Spring Street, La Mesa, California causing significant damage to the building. Since the date of the arson, investigators from the La Mesa Police Department, San Diego Police Department and the San Diego Field Office of the FBI have been jointly working to identify and apprehend the individuals responsible for the arson.

On Monday, November 2, 2020, Alexander Jacob King,19, was arrested by investigators near his San Diego home. King was booked into San Diego County Jail on felony charges of arson of a structure and looting.

Ricky Bernard Cooper, 33, was also arrested on Monday and booked into San Diego County Jail on a felony charges of arson of a structure as well as four separate counts of looting related to various businesses in the La Mesa area.

The cases are currently under review for criminal charges by the San Diego County District Attorney’s Office. No arraignment date has been set at this time.

While peaceful protest is a right protected by the U.S. Constitution and a time-honored tradition in our country, violent criminal activity, including arson and looting, will not be tolerated. San Diego law enforcement, including the San Diego FBI Joint Terrorism Task Force, San Diego Police Department and La Mesa Police Department will investigate and bring violent criminal actors to justice. The safety and security of San Diego citizens is paramount.

The public is urged to remain vigilant and report suspicious or criminal activity to: