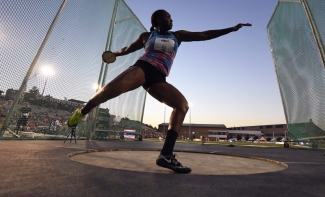 Ashley and Thomas-Ricketts each finished second at their national championships

Ashley will represent Team USA in the discus throw while Thomas-Ricketts will compete in the triple jump for the Jamaican National Team.

The duo earned spots on their national teams with respective second-place finishes at their senior national championships.

As one of the top-three finishers in the event (62.20m), and by reaching the IAAF qualifying standard of 61.20 meters, Ashley’s second-place showing in the discus throw secured her a spot on Team USA at the IAAF World Championships.

The 2017 World Championships marks the fourth time the 2012 NCAA discus champion and four-time All-American will represent the United States at the international level. She competed for Team USA at the World Championships in 2013 and 2015, and, after winning the 2016 U.S. Olympic Trials, represented the United States at the 2016 Rio Olympics. Ashley has finished second-or-better in each of her last three national championships (second in 2015 and 2017, first in 2016).

“Competing at Worlds is special to me,” Ashley said. “My expectation is to enjoy the process and enjoy being there. I've done well enough to get there and if I stay true to myself, I think I could surprise myself and do well.”

At the Jamaica Senior National Championships, Thomas-Ricketts took home silver in the triple jump with a 47-foot, .5-inch (14.39m) leap for a spot on the Jamaican National Team. The 2016 Olympian for Jamaica and a three-time NCAA triple jump champion for SDSU (2013-14 outdoor, 2014 indoor) was a seven-time USTFCCCA All-American and a nine-time MW champion for SDSU.