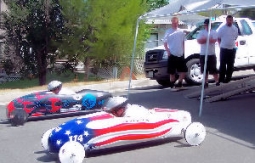 October 30, 2012 (La Mesa)--Youngsters age 7-17 from throughout Southern California and Arizona are getting ready for two days of Soap Box Derby Races, November 3 and 4, as members of the host Kiwanis Club of La Mesa adjusts to modifications to the course on Junior High Drive at La Mesa Middle School.

The two-day Rally Race is a double-elimination tournament in three divisions. Heats get underway by 9 or 9:30 a.m. after registration and weigh-in, and continue until about 4 pm. The public is invited to come watch and enjoy a modern version of the classic American tradition. Breakfast and lunch items will be prepared and sold by the Lake Murray Kiwanis Club and the Boy Scout troop they sponsor.

Rally races help the drivers gain experience and earn points to qualify for the National All-American Soap Box Derby in Akron, Ohio. With the major sponsorship of Drew Ford, the La Mesa Kiwanis Club has run two Rally Races and one Annual Local Race for more than 12 years. Winners of the May race are sent to compete in Akron.

Junior High Drive has been the perfect venue for a Soap Box Derby. A long, sloping block with the La Mesa Middle School grounds on the south side, and no homes facing the street on the north side. On weekends in November, March and May, the club could set up a tented starting ramp, electronically timed finish line, and rows of orange cones and hay bales on the bottom of the hill. Nearby Highwood Park is a great staging area.

Then the City of La Mesa reconfigured the sidewalks as part of its Safe Routes to School Project.

“With the pedestrian pods on every corner, the course is about 25 percent narrower and 33 percent shorter now,” said Derby Director Steve Blake. “At first we thought we’d have to find a new hill. But by making some adjustments with where we start and where we finish, we’ve decided to stay on Junior High Drive and see how the couse works out with the kids and their parents.”

As for the adjustments for the November derby, Blake described how the starting ramps will be positioned higher on the hill, more pre-race prepping of the cars will take place in the Highwood Park parking lot, and the finish line will be positioned to avoid the pedestrian pods and allow ample room for the drivers to brake their cars safely to a stop.

Opportunities for sponsorship of cars or program advertising are available to individuals and businesses.  For more information, contact Blake at 619-461-1608.