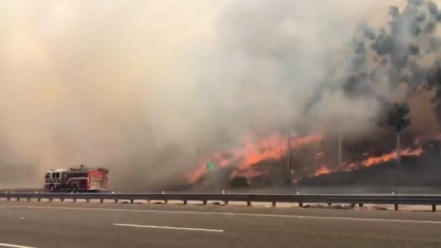 A second blaze, the Blueridge fire, broke out later near Yorba Linda and has charred roughly 1,200 acres.

Nearly 91,000 residents were ordered evacuated from homes in and around the cities of Irvine and Lake Forrest as the fires raged largely unchecked through canyons filled with dry brush in the foothills of the Santa Ana Mountains.

Another 70,000 evacuations were ordered in the Yorba Linda area.

Winds as high as 60 mph grounded aircraft used to battle fires for most of the day, but by late Monday afternoon, a DC-10 was up in the air making air drops in Yorba Linda.

“This is a tough fire,” said Orange County Fire Authority Chief Brian Fennessy. “We’re experiencing very high winds, very low humidity… Any time winds are that bad you can’t fly, and that certainly has an impact on both hand crews and bulldozers and firefighters at the end of those hose lines. Air attack is very important, but still it’s the firefighters on the ground that put out that fire.”

The injured firefighters are 26 and 31 years old. Both sustained second- and third-degree burns about 12:15 p.m., one over 65% of the body and the other over half the body, Fennessy said. Both firefighters were being treated at OC Global Medical Center in Santa Ana.

“I know them personally,” Fennessy said. “They’re gravely injured. Their families are with them.

Irvine Mayor Christina Shea said her city had opened up eight facilities to shelter evacuated residents and several quickly filled up. Irvine Police Chief Mike Hamel said city officials were working with the American Red Cross to provide overnight shelter for residents with no place to go. The city’s animal shelter was open to house pets.

Southern California Edison reported shutting off electricity to 21,000 homes and businesses in the region as a precautionary measure in the face of elevated fire risks posed by dangerously high winds.

The southbound Riverside (91) Freeway to the Foothill Transportation Corridor (241) toll road was closed and the northbound 241 was closed at Portola.

The latest outbreak of fires capped a summer of record California wildfire activity stoked by increasingly frequent and prolonged bouts of extreme heat, drought, wind and dry lightning storms that scientists point to as a consequence of climate change.