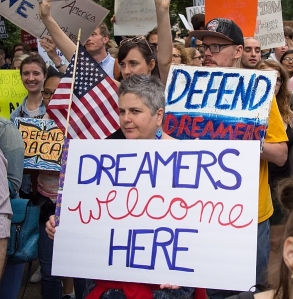 Photo from Wikimedia Commons by Rhododendrites

U.S. District Judge Nicholas Garaufis in New York, in a decision in mid-February, blocked the Trump administration from rescinding the DACA program as cases challenging it remain on appeal in the court system.  In his decision, Judge Garaufis ordered the federal government to continue processing both new DACA applications and DACA renewal requests, without any changes to the terms or conditions of the program created during the Obama administration.

President Donald Trump issued an executive order last year to end DACA, but gave Congress six months to enact legislation to protect DACA recipients. That six month-window ends on March 5th and thus far, Congress has failed to act due to opposition from most Republicans to protecting young people who came to America as children of undocumented immigrants.

The dual court decisions grant a reprieve from deportation to these young immigrants for now, though that could change if the U.S. Supreme Court decides to hear an appeal filed by the Trump administration. The high court has not yet said whether it will hear the appeal, or let the lower court decisions stand.

Heartless bureaucrats! So out of touch with reality, and enacting inhumane actions! Shame!