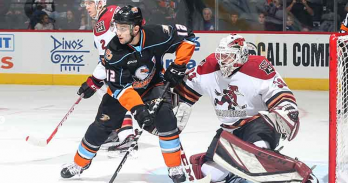 Joe Blandisi scored his sixth goal and 19th point of the season. Since joining San Diego on Dec. 20, Blandisi has earned five points (3-2=5) in eight games, with each of his three goals coming the past four contests (3-1=4).
Kevin Roy extended his point streak to three consecutive games (1-4=5) with an assist on Blandisi’s first period goal.
Nick Kerdiles, Jacob Larsson and Marcus Pettersson each recorded assists. Reto Berra stopped 26-of-29 shots in the setback to end his three-game win streak.
POSTGAME QUOTES
Jaycob Megna
On the game
They are in first place for a reason. It’s a good measuring stick for us. We are not quite where we want to be yet. We have got them twice more coming up here. It will be another good test and hopefully we will get them back on Monday.
On being scheduled three straight games against Tucson
It’s kind of strange but it is what it is. We will go up there and try to get two wins.
On the power play
Power plays either give the team momentum that has it or to the team that kills it. They made some big saves and their goalie played well. That gave them a little bit of juice. We are relying a bit too much on our power play and we need to establish a better game at five on five.
On Tucson’s ability to block shots
They really committed to it. I thought we did a good job trying to fake shots and go around them but they have layers. You just have to keep going to the net and keep trying to put pucks to the net and hopefully some will get through.
Head Coach Dallas Eakins
On the game

It was an up and down game for both teams, but you know it ends up in the end being tied very late into it. I think that’s what you are going to see the next two against them as well. The two teams are very easily matched and the team that makes the least mistakes will come out on top.
On the 5-on-3 and the 4-on-3 power plays
We had a couple on looks that we wanted and on our power play 5-on-4 early I didn’t think we were great but then we had some great action on it. It’s been a really strong suit of our team so as long as we are getting our looks we are happy with that because we know we will finish in the end. From an offensive point of view I thought that the goal post gods were with us early because we had a couple against us and boy would we have liked one of those three late to go in.
On being scheduled three straight games against Tucson
Going into the game they were first in our division and we were right behind them, so the next two games are extremely important to solidify our spot.