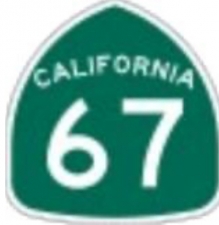 May 5, 2020 (Lakeside) – A male driver and passenger were transported to a hospital with major injuries after jumping from a moving vehicle in Lakeside, says Officer Travis Garrow.

The 1996 Ford L8000 was traveling south on State Route 67 north of Slaughterhouse Canyon on May 1st around 3:27 p.m. when for reasons still under investigation, the driver and passenger jumped out.

The uncontrolled vehicle continued south in the center divide and struck a metal guardrail, overturning in the northbound lanes.

No other vehicles were believed to be involved and at this time and the collision is still under investigation.