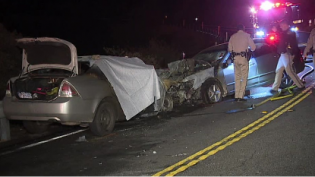 A woman was driving a 2007 Ford Fusion eastbound, reportedly at a high rate of speed, when her vehicle crossed the center line and collided with a 2004 Honda Accord driven by a man, 35.

“The driver of the Honda was pulled from his vehicle by emergency personnel, however succumbed to his injuries on scene,” says Officer Travis Garrow with the California Highway Patrol.

The female driver also suffered fatal injuries at the scene and has yet to be identified. Once her identity is confirmed and the family has been notified, her identity will be released through the medical examiner’s office.

At this time, it is unknown if alcohol and or drugs may be a factor in this collision, Officer Garrow adds.