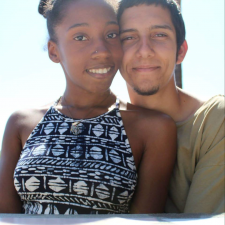 The accident forced shutdown of the highway for emergency response and the investigation into the crash.

Reagan Rezendes, Floros’ cousin, wrote this tribute to the couple on Facebook after hearing of the tragedy:  “They were amazing, beautiful, strong, caring, intelligent, deep thinking, young adults. I will forever hold them in my heart and I will never be the same now that they're gone.”