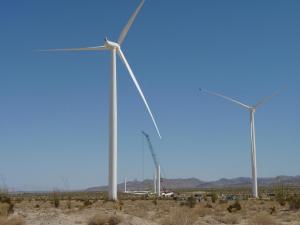 February 28, 2014 (San Diego) – Opponents of  the Tule Wind project in McCain Valley will have their day in court on Monday, March 3 in San Diego’s U.S. District Court.  Then on April 25, a separate suit against the County over its wind energy ordinance and general plan amendment will also be heard.

The suits were filed by the Protect Our Communities Foundation and Donna Tisdale. Tisdale informed ECM that it's important to have many East County residents attend these trials.

The first case was filed against the federal Bureau of Land Management over its approval of Iberdrola's Tule Wind, a massive project slated to be built on public lands. That case will be heard on March  3 at 9:30 a.m. in Room 4A of U.S. District Court, Southern District by Judge Sammartino. The address is 221 West Broadway, San Diego.

The case against the County will be heard on April 25 at 1:30 p.m. in Department C-71 by San Diego Superior Court Judge Timothy Taylor at 220 West Broadway, San Diego.

Tisdale hinted that another lawsuit may be in the works. “Protect Our Communities is now dealing with the Bureau of Indian Affairs approval of Tule Wind phase II on the Ewiiaapaayp reservation,” she said.  The tribal lands constitute a small portion of the Tule Wind project which also includes turbines planned on federal, state and county lands.

For more information on the Protect Our Communities Foundation, visit www.protectourcommunities.org.

Let's hope they succeed. Maybe legally strong-arming these frauds is what we need in the short run. But in the long, it's hard to imagine any lasting change without changed hearts and minds. As the great conservationist Aldo Leopold wrote, "No important change in human conduct is ever accomplished without an internal change in our intellectual emphases, our loyalties, our affections and our convictions."
I am aware of several lawsuits in the works across the US and more are coming. These mounting lawsuits can not all be dismissed and eventually the wind industry's mortality fraud will be presented in the courts.