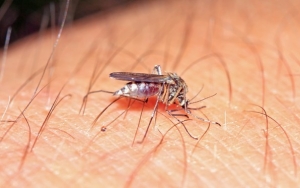 September 11, 2015 (Santee)--The death of a 79-year-old San Diego woman on Sept. 8 and the recent hospitalization of an 80-year-old Santee woman are under investigation as probable West Nile virus cases, the County Health and Human Services Agency announced today. The 80-year-old woman is currently recovering.

Both women were admitted to local hospitals in late August after experiencing symptoms of encephalitis, an inflammation of the brain that can be caused by viral or bacterial infection.  Testing to confirm West Nile virus in both cases will be performed next week by the California Department of Public Health.

West Nile virus is carried by mosquitoes. The County Department of Environmental Health Vector Control Program conducted inspections in the vicinity of where the human cases were reported to check for potential areas of mosquito breeding. Vector Control also set up traps in those areas and is sending precautionary notices to residents, alerting them that West Nile virus has been identified in their neighborhood. Vector Control is providing residents information on what to look for, how to eliminate mosquito breeding sources on their property, and precautions they can take to protect themselves.

Only one human case of locally acquired West Nile virus has been confirmed in the county in 2015.  This year, Environmental Health has identified 140 dead birds and 22 batches of mosquitoes that tested positive for the virus. In 2014, a total of 41 dead birds and six mosquito batches tested positive for the virus. That year 11 county residents were diagnosed with the disease and two died.

“With the recent heat, you may be spending time outdoors in the early morning or late evening hours, so it’s important to protect yourself from mosquitoes with clothing or an effective repellent,” said Wilma Wooten, M.D., M.P.H., County public health officer.  “And if you open doors and windows to cool off your home, you need screens to keep the insects out.”

Of those individuals who become infected with West Nile, 80 percent will have no symptoms. Of the 20 percent who get sick, most have mild symptoms of headache, fever, nausea, fatigue, skin rash or swollen glands. One in 150 of those infected will have serious neurologic complications that can be life threatening. The risk of complications increases for those over age 50 and people with weakened immune systems.

County officials remind the public that they can protect themselves by following the County’s “Prevent, Protect, Report” advice.