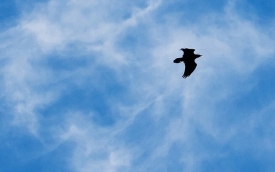 Two dead American crows, one from Ramona and one from Carlsbad, were turned in by members of the public and have tested positive for the disease. The first bird, also an American crow, was found near Lakeside.

County vector control and environmental health officials said the discoveries are a reminder that people should protect themselves from West Nile virus, a potentially-deadly disease that is transmitted to people most often by mosquitoes that have fed on infected birds.

“People can protect themselves by taking some simple precautions,” said Jack Miller, director of the Department of Environmental Health. “The big things to remember are to use bug sprays to keep mosquitoes away; wear long sleeves and pants if you’re going to be outside at dusk when mosquitoes feed; and make sure your yard isn’t a mosquito breeding ground.”

West Nile virus is mainly a bird disease that can be spread to people when mosquitoes feed on the blood of an infected bird and then a person. Eight out 10 people who become infected with West Nile virus won’t suffer any symptoms at all. Most people who do get sick will suffer mild symptoms: headache, fever, nausea, fatigue, skin rash or swollen glands. However, in rare cases, people can suffer serious neurologic complications that can be life threatening. The risk of complications increases for those over age 50, and people with weakened immune systems.

2012 was one of the worst on record for West Nile virus across the United States, but not here, where the County of San Diego has taken aggressive steps to control the mosquito population. Just one person has been diagnosed locally with West Nile virus in the last three years and that person did not become ill.

However, more than 5,000 people got sick and 286 died nationwide from the disease in 2012. Last year, DEH and its Vector Control Program reported just one infected bird.

Vector control is the DEH program that educates the public, and monitors and controls “vectors” — pests such as mosquitoes that can transmit disease to people.

For more information about West Nile virus or to find locations to get free mosquito fish visit www.SDFightTheBite.com. Sign up to receive the latest West Nile virus text message updates via cellular telephone by texting the word PEST to 75309 on your cell phone.