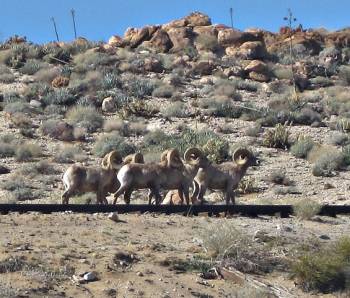 The latest actions brings the total to at least seven legal actions filed over the project, all alleging that multiple laws have been broken to approve the controversial development on U.S. Bureau of Land Management property in Ocotillo, California.

The new suits were filed by the Protect Our Communities Foundation, Backcountry Against Dumps, and Boulevard Planning Group Chair Donna Tisdale.

The first suit challenges the Biological Opinion issued by federal officials, charging that officials provided a “skewed and unsupported analysis” that not  ignored actual evidence of bighorn sheep on the project itself.

Officials also failed to analyze effects of stress from the project on sheep populations in or near the project site—stress that could reduce reproduction and cause the endangered population also threatened by wind projects on nearby sites to dwindle.   The Biological Opinion also failed to disclose that another pending lawsuit seeks to reestablish critical Bighorn habitat designation for portions of the project site, which were delisted shortly before the project was approved. 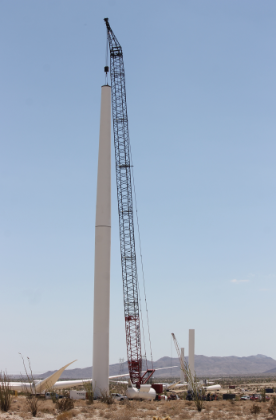 The second suit names Interior Secretary Ken Salazar as a defendant, along with BLM officials and the federal agencies.   It observes that the project’s 112 towering wind turbines, substation, switchyard, roads, transmission lines and other elements will destroy natural and cultural resources, diminish desert vistas from Anza Borrego Desert State Park and threaten the health of Ocotillo residents, among other things.

NEPA violations alleged including failing to analyze alternatives to the project, failure to disclose many negative impacts or propose mitigation for those impacts, and failure to adequately address concerns raised in comments.

The MBTA states that unless otherwise permit, it shall be “unlawful at any time….to take [or] kill …any migratory bird…nest, or egg of any such bird…”BLM violated the MBTA by failing to secure permits to take, or kill, many protected bird species that even key project documents admit will be harmed, such as burrowing owls that may be crushed in burrows and dozens of raptors that even project applicants have admitted will likely be killed by turbine blades.  Nor does the Final Environmental Impact Statement analyze the cumulative impact on golden eagle deaths in California, where the decline has been precipitous in large part due to wind turbines in eagle habitat. 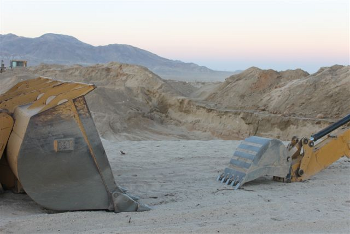 Noise impacts on birds onsite are also ignored, along with impacts on bats that suffer internal bleeding in their lungs from air pressure differential caused by wind turbines, a condition known as Barotrauma.  Noctural avian surveys were not done even though the Final Environmental Impact Statement (FEIS) admits it is likely that nocturnal species such as owls would be at “higher risk of collision” because turbines “may not be visible to the species migrating at night.”

The suit chides BLM for further blithely concluding that impacts are “unlikely to be cause for concern to health” of humans despite that the fact that dozens of residences are within a mile of turbines.  “To avoid the negative health im pacts from wind-turbine generated ILFN (infrasound and low frequency noise) such as sleep disturbance, tinnitus (ringing of the ear) nausea, unsteadiness and general disequilibrium, experts recommend setbacks from large wind projects of at least 1 mile,” the suit states.

Ignoring evidence from experts on health risks violated NEPA, as did ignoring impacts of audible noise and dirty electricity, or electric and magnetic field pollution in the form of stray voltage measured at some other wind projects.   Those impacts may include increased risk of attention deficit disorder, diabetes, fibromyalgia and more, the suit contends.

Ignoring visual impacts of turbines 45-stories tall (taller than the Statue of Liberty) clearly violate legal requirements for this region’s designation as limited use and mandates for views to be protected. Nor were potential hazards from blade shadow flicker on motorists on Interstate 8 and Imperial Highway S2, which cross the project site, assessed, another NEPA violation,  plaintiffs contend.  The current designation requires that activities “retain the existing character of the landscape” and does not allow activities that “dominate the view of the casual observer.”  Towers up to 500 feet tall with blades extended, each with blades spans the size of football fields and foundation holes some 238 feet across, are industrial use—high use, not low, plaintiffs argue.

The second suit also addresses Bighorn sheep habitat issues and chides the federal government for insisting sheep will likely adapt overtime to wind turbines in their midst.    In addition it addresses concerns of numerous tribes about violation of laws protecting cultural resources and the lack of adequate research into whether the site qualified for the Register of Historic Places.

Failure to mitigate for likely erosion from the project is also cited. In addition, the suit states  that deferral of analysis of numerous site-specific issues until after project approval is illegal under NEPA.  These include a full geotechnical study for seismic safety, dust control, traffic and transportation plans, storm water pollution prevention, cultural resource monitoring/mitigation, waste management, eagle conservation and more.