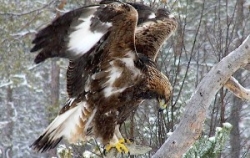 Yet David Bittner of the Wildlife Research Institute, who is periodically hired to do  environmental studies for large wind projects, made no reference what-so-ever to wind turbines in his 2012 pamphlet. Instead he claims the “worst threats are putting extensive trail systems in land that is dedicated as a Preserve...” Bittner, who boasts his organization has “conducted over 600 helicopter surveys of Golden Eagles since 1996” - though carefully staying at least 30 meters from the nest - appeared to be stating that the #1 threat to the golden eagle population is hikers and rock climbers! (This appears to be a false impression and would soon be corrected.)

The mental picture of Bittner’s helicopter buzzing eagle nests lodged itself in my mind. It sounds like a joke, Only I have heard similar stories about researchers approaching African Wildlife in trucks. So it is possible Mr Bittner is right - about the use of helicopters anyway.

Jim Wiegand, of Save the Eagles, believes a very different “human activity” is bringing the Golden Eagle population to the verge of extinction. Last October he wrote the Bureau of Indian Affairs that, “Wind energy has been a disaster for the golden eagle.  The negative footprint from wind energy projects has created ecological sinks for migrating and regional bird populations.  The decades of killing of so many golden eagles by the wind industry is having a profound negative impact. The proof lies in Southern CA where there is evidence of a golden eagle population decline of 80-90 percent.”

He mentioned the most infamous killing ground in an email to San Diego Loves Green, “No golden eagles have nested in the 86 square mile boundaries of Altamont Pass since at least 1989. I know they once did because I saw them. Thousands of golden eagles have been killed at this wind farm over the years. Many of the dead are young eagles just leaving their nests and learning how to hunt. They wander out to hunt amongst the turbines and end up mutilated. Golden eagles have been killed by the oldest small turbines at Altamont and with the industry's new (so called safer turbines) large turbines. With so many eagles being killed by turbines I do not understand how anyone could not mention this threat.”

So I phoned Wildlife Research Institute to ask. Someone with a very pleasant voice, named Katie, answered. She told me that the alert in question was specifically designed to address the problem of hikers getting too close to eagles. The WRI is presently working on an alert about electrification. (As they have a seven foot wing span, golden eagles do touch two wires.) There are also problems with second hand poisoning (they eat the rodents people poison) and wind turbines. Katie acknowledged each of these dangers and said they were best addressed individually.

I had more questions.

Jim Wiegand informed me that, “In the last 10-15 years I have noticed a disturbing trend. Wind industry biologists have began using the  words  "territories", "active territories" , "inactive nests", "nest territories" and "active nests"  in their surveys and reports.   These terms are vague, have different meanings, are misleading, and contribute to misrepresentations in population estimates.   The term "active nest" when pertaining to the analysis of any nesting golden eagle population, should be used only if the nest is shown to be occupied by the presence of adult eagles, with eggs and/or dependent young in a given breeding season.  A nest is not really active if it is used as a feeding platform and has newly added nesting material.  These signs of use have nothing to do with an accurate analysis of the golden eagle population because abandoned eagle nests can be and frequently are used by a variety of species.  Many eagle nests are used by ravens, hawks, owls, prairie falcons and even wood rats.  The use of the eagle nests by these species makes the nests "active" but it has nothing to do with nesting golden eagles”

Compiling the data from two 2010 studies of the Mojave - one of which was carried out by the Wildlife Research Institute - Wiegand points out they found 45 empty nests and one that was occupied by Golden Eagles.

Similarly, “In the WRI eagle surveys conducted for Tule wind project and Ocotillo wind projects a large numbers of empty nests were also found. In the 2010 WRI stated ten historic golden eagle territories were surveyed, of which six were said to be active, but of those, only three of the eagle nests were actually occupied with incubating adults.  Again in 2011 WRI surveyed what they claimed to be eleven golden eagle territories, six were said to be occupied during the first round of surveys (Cane Brake, Coyote Mountains – West, Garnet Mountain, Glenn Cliff, Monument Peak, and Moreno Butte).  But in the most important statistical category as it relates to eagle populations, only three of the territories were confirmed as being productive (eggs or young) during the second round of surveys (Cane Brake, Glenn Cliff, Moreno Butte).”

He informed me, “The thought of 49 pairs of eagles existing in San Diego County is ludicrous. What are they eating? There would have to be an abundance of ground squirrels, jack rabbits, cottontails, and even feral cats for them to eat. This abundance of food would also be seen by people in the form of road kill numbers. If one were to accept the argument or illusion that there were 49 pairs of eagles in San Diego, than it could be successfully argued that there still existed a very healthy eagle population, a healthy population that exceeds the densities to be found in most other regions.”

Wiegand believes there are probably no more than 10 resident golden eagles pairs in San Diego County.

From what Katie says, this does not necessarily conflict with the idea there are 49 “active golden eagle territories.” They do not remove the "active" designation from a nest until it has been been empty for five years. That is because eagles move around a lot.

To ensure there was no mistake, I asked, "So its quite possible that half those nests are empty?'

I did not point out that this system would be of little immediate use if something happened to the eagles. You could be recording “active golden eagle territories” for several years after all they all died or moved away. WRI's system does, however, establish the chronology that enabled them to state there were 103 golden eagle territories in the 1950's.

Wiegand had further insight into the empty nests, "If there are a 2-3 of these empty nests near historic foraging areas and there are no eagles to be found, it is abandoned habitat. Some of the Desert nests I know about located on cliffs, have been used for hundreds if not several thousand years by countless generations of eagles. They have alternate nests but they are always hunting the same prime foraging areas in their territory. They need these areas to raise their young. These areas are also fiercely defended against other eagles so there is enough food to raise their young. If an adult happens to be killed, with a few months time another eagle from the population would step in and fill the void. If both parents are killed and there are no other eagles in the region to pick up this prime habitat, it is a very bad sign because the best habitat is always the first to be occupied and the last to be abandoned. This is what I see taking place."

He informed me that, “The Wildlife Research Institute has done some very good work with the golden eagles, but in my opinion not enough. This species is in big trouble around the world because of wind turbines.”

There is good reason to suspect that the US Fish & Wildlife Service's figures, for the number of birds killed by wind turbines every year, is far too low. Wiegand told me that researchers are still searching for corpses within a 50 meter search radius (drawing below) , “They're only looking for and only counting carcasses found small areas around these huge turbines. Areas the same size as the ones used on the small 100 kw turbines. Turbines now twenty five times larger  and the industry is still using the same size search areas. This is not scientific. It is not even close.” 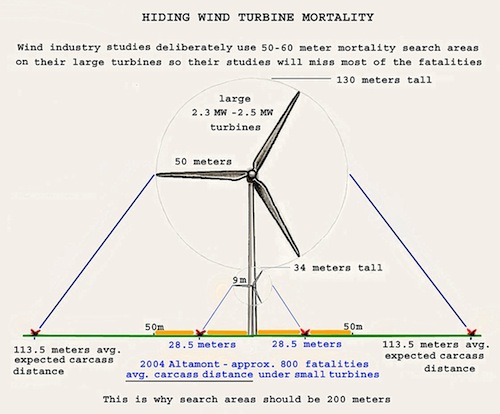 A much higher number of fatalities is obtained when  the search area is extended out to 200 meters, to allow for the increased height of turbines. Only, as you see in the footnotes, at least 368 were not counted and there were probably a great many more. 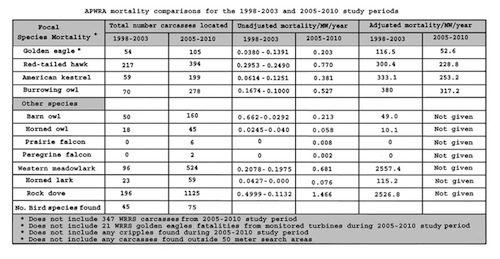 Though developers have attempted to rectify the situation using radar, this does not appear to be effective. Now, in what looks like an attempt to free up the Wind Industry from constraint, the Department of the Interior is considering weakening the protection around eagles.

Bizarre as WRI's methodology may seem, at least to an outsider, they also mention a drastic reduction in the Golden Eagle population. Katie mentioned four causes of this collapse: close proximity to hikers, second hand poisonings, electrocution and wind turbines.

Some may suggest that Mr Bittner's research is deliberately framed so that the findings will not offend the big wind projects that periodically employ him. I do not know. When I asked Katie about wind turbines, she immediately became insistent that they are not the number one cause of eagle mortality.

This is not an academic question, there are a number of big wind projects are under consideration. The Bureau of Indian Affairs is considering Shu’luuk Wind on the Campo reservation. The County Supervisors will soon consider Jewel Valley, a wind project proposed in Boulevard near Shu’luuk. The federal Bureau of Land Management has approved a portion of Tule Wind on federal formerly protected land in a beautiful scenic area nearby that is known to be eagle habitat (golden eagles); Tule still has approvals pending from the state and an Indian tribe on adjacent lands, all within very close proximity to the other projects. If these projects go forward and Jim Wiegand is right, San Diego's golden eagle population may disappear.