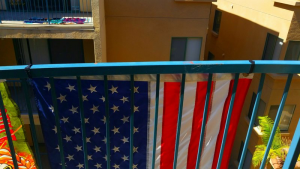 Cameron Box, an active duty Coast Guard member, and Connor Fenwick, who is in the Army ROTC, proudly display the U.S. Coast Guard flag, an Army flag and the American flag from the balcony of their on-campus housing unit at San Diego State.  However, the school is threatening to expel them, citing a “fire hazard”, also claiming that the flags “block visibility.”

According to the SDSU Residential Living Agreement, “no items except for patio furniture designed for outdoor use may be placed on balconies.”

Fenwick told KUSI News, “If you look up the definition of furniture, it says that it’s an ornament, and ornaments are particularly designed to beautify something or make it look good. II don’t know anyone who wouldn’t say a flag’s not designed for outdoor use.”

In a letter that the students received from SDSU, the school says that the policy was indeed violated.  The young patriots are now in danger of losing their education.

Box and Fenwick plan to fight back.  They have launched a petition online at Change.org asking the university and Governor Jerry Brown to protect their First Amendment right to freedom of expression.

The petition concludes, “Students should be allowed to express themselves in the comfort of their own residence without being subjugated to censorship.”