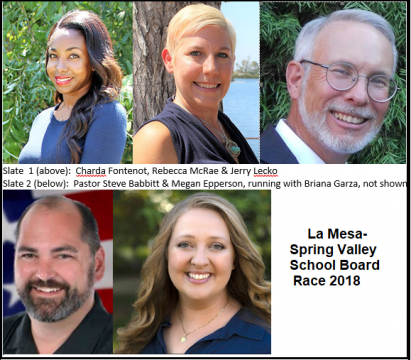 September 21, 2018 (La Mesa) – Controversy has enveloped the La Mesa-Spring Valley School Board, where three incumbents are stepping down – leaving three open seats. One slate of three challengers is critical of the board’s action, while another trio of candidates is backed by the same forces as the outgoing board members. A seventh candidate is running independently.

Board president David Chong, a gun store owner, drew fire for his statements slamming students concerned about gun violence on campuses after the mass shooting at a Florida high school.  Chong has said he is moving out of the area and thus not seeking reelection.

Rebeka Basson is also stepping down.  A church secretary appointed to fill a vacancy, she brought harsh criticism to the board for naming her over more qualified candidates including a PTA president and bond oversight committee member, as well as a former teacher’s union representative. Basson at the time had no children in the district, had attended mostly private schools herself, had no experience on any board and also faced scrutiny over being registered to vote in another state when she accepted what many viewed as a partisan appointment. She is expecting and has said she wants to focus on her family.

Bob Duff, who has been on the board for 14 years, is retiring due to age.

Action Community for Educators and Students (ACES) is a grassroots organization that formed to support a slate of candidates that seeks to bring new direction to the board.  The group is backing two party-endorsed Democrats, Charda Fontenot and Rebecca McRae, and one political independent, Jerry Lecko.

Fontenot is a an educator, parent and entrepreneur who has served on the PTA and District Advisory Council and is endorsed by the LMSVA Teacher’s Association. McRae  is a teacher and parent.  Lecko, a parent, architect and businessman, previously served on the school board and chaired the Prop M citizen’s bond oversight committee.

The Republican Party, which has long held all five seats on the board, has endorsed Steve Babbitt, a businessman, parent and pastor of the Spring Valley Church who previously served on the Prop M Citizens Oversight Committee and is endorsed by Chong, as well as Brianna Garza, a parent/businesswoman, and parent Megan Epperson.

The seventh candidate, backed by neither slate, is Matthew Austin Sablove, an educator and businessman.

Note: An online search did not find a website for Sablove, nor a photo of Sablove or Garza.