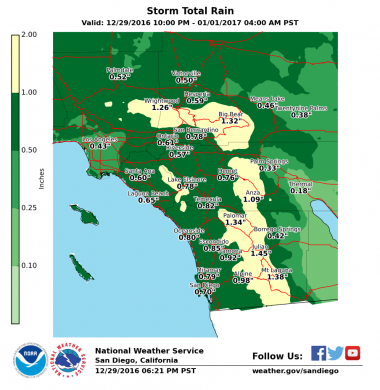 The first storm could bring up to an inch of precipitation in mountains and foothills, up to a half inch in coastal and valley areas, and a third of an inch or less in deserts.  The second storm is forecast to bring moderate to brief heavy rain, impacting New Year’s Eve travel with reduced visibility and slick roads Saturday night. Watch for ice on mountain highways.

The second storm will have similar precipitation totals to the first, but snow levels are forecast to drop lower, with traces down to 4,000-4,500 feet by Saturday night and up to five inches at elevations between 5,500 and 6,500 feet. Gusty winds up to 30 miles an hour are forecast in the mountains, with winds up to 24 knotts and hazardous sea conditions on the coast.

If the freezing level lowers to 4,000 feet, I-8 through the mountains in San Diego’s East County could be impacted, as well as Cajon Pass, says forecaster Mark Moede at the National Weather Service.  Expect clear skies Sunday afternoon to start off the new year.