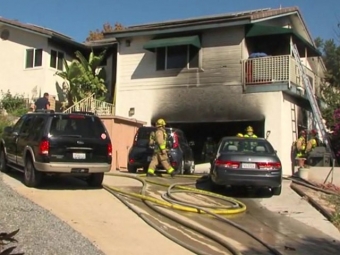 According to ECM news partner 10 News, Karla Fierro and her boyfriend helped her three children escape the fire, along with their dog. With help from a neighbor, they also evacuated a paralyzed man whom her boyfriend is caretaker for. The disabled man and his caretaker were treated at a hospital for smoke inhalation.

Heartland Fire and Rescue units from La Mesa and Lemon Grove responded to the fire reported at 10:20 a.m., arriving within five minutes to find heavy smoke and fire coming from the two-story home’s garage.  A second alarm was issued, bringing more fire units.

Firefighters found the fire had spread from the garage into the house.  “The fire was contained within 30 minutes,” says Sonny Saghera, public relations officer for Heartland Fire and Rescue.