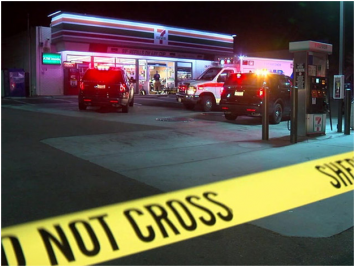 Paramedics performed CPR to save the victim, who was rushed to a hospital.  She underwent surgery for stab wounds in her upper torso but is expected to survive, the Sheriff’s Department reports.

A light-colored Mercedes Benz had reportedly been spotted fleeing the scene.  Deputies found a car matching that description nearby, but when they tried to stop the Mercedes, the driver sped away, leading deputies on a pursuit through Jamul at speeds over 100 miles an hour.

Officers found the vehicle abandoned in the Dulzura area. Deputies who inspected the Mercedes found blood inside.  Following an intensive search, the driver was located on a hillside near Highway 94 and Freezer Road  by Border Patrol agents at 8:20 a.m.  He was arrested for felony evasion of arrest and additional charges related to the pursuit, says Lieutenant. Tom Seiver.

More charges may be filed following investigation into the stabbing in La Mesa, as well as a similar stabbing in El Cajon.

Patch.com reports that El Cajon officers summoned to the parking lot of the Grocery Outlet Bargain Market at 350 North Second Street in El Cajon around 3 a.m. found a woman who had been stasbbed and dumped from a Mercedes-Benz sedan. She had suffered “significant stab wounds and massive blood loss,” El Cajon Police Lt. Eric Taylor told 10 news.

She was taken to a hospital by Heartland Fire and Rescue, where she was admitted in critical condition.  Soon after, as officers investigated the bloody parking lot, the stabbing in La Mesa, just over four miles away, was found.

No update on the El Cajon victim has yet been provided.  The name of the suspect has not yet been released.

The victims have been injured too severely to speak with authorities so far, and it is unknown whether the victims may have know each other, or what the motive behind the brutal assaults may have been.