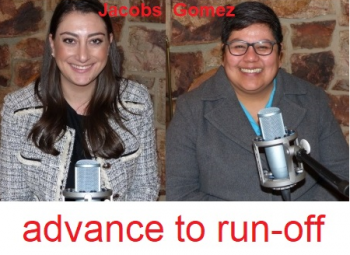 In the 53rd Congressional District, her shoes will be filled by a Democratic woman, as Sara Jacobs and Georgette Gomez, both captured the #1 and #2 slots, respectively to make the November run-off out of a 13-candidate field. The 53rd Congressional district includes the heart of the city of San Diego as well as La Mesa, Lemon Grove, part of El Cajon, Jamul, Chula Vista, and more.

Jacobs says she’s dedicated her career to building a better, safer world and fighting for the most vulnerable people by making institutions and policies fairer. She’s served at the U.S. State Department, at UNICEF, and the United Nations. She holds a Master of International Affairs degree in international security policy and conflict resolution from Columbia University. She’s Founder and Chair of San Diego for Every Child: The Coalition to End Child Poverty.

Granddaughter of Qualcomm founder Irwin Jacobs, she wants to harness technology to solve big problems and served as founding CEO of Project Connect, a nonprofit that helped map every school in the world with a goal of connecting all to the Internet, a  project now a flagship part of UNICEFs work around the world.

Daughter of immigrant parents, if elected, Gomez will be the first LGTBQ Latina in Congress, where she wants to focus on needs of working families and communities. On the City Council, she’s worked to expand affordable housing and protection for renters, as well as implementing the city’s climate action plan.  She holds an environmental degree from San Diego State University and as former associate director of the Environmental Health Coalition, led a campaign to protect children from toxic chemicals in neighborhoods.

Gomez says she is running for Congress because “we need the federal government to really invest in our communities” which need better education, infrastructure, jobs and housing in her view, as well as to prioritize addressing the climate crisis.

On healthcare, Gomez supports Medicare for all as the “ultimate solution” but realizes this will take time. She wants to find a path to build support for this while meanwhile protecting those without insurance or whose insurance isn’t affordable. “Trump is attacking what we already have,” she says, noting actions that have weakened the Affordable Care Act.

Gomez firmly believes in protecting and expanding Medicare and Social Security for seniors, which is also under attack. “We’re going backwards,” she says, adding that she believes security in retirement years “should be a basic right.”

High healthcare premium costs and copays, as well as prescription drugs are concerns Jacobs hears about frequently from families. ”I think healthcare is a human right and we need to be doing everything we can to get to universal coverage. I do support Medicare for All and I would vote for any of the bills in the House…We also need to bring costs down.” That includes cracking down on “bad actors” such as pharmaceutical companies spending more on marketing to consumers than on innovation.  Jacobs wants to increase funds for the National Institutes of Health (NIH) research and grants to invest in research and bring down costs.

“I am so proud of this campaign, and so grateful for all of our incredible supporters. Throughout the primary, our grassroots campaign knocked on tens of thousands of doors and made hundreds of thousands of calls to voters.

“We saw that San Diegans are ready to send a new generation of leaders to Washington and that we don’t have to settle for the same type of politics — where favors are traded, games are played, and nothing gets done for people back home. I’m going to go to Washington with one goal in mind: to actually make a difference in San Diegans’ lives — by respecting everyone, listening to everyone, and working across the aisle to pass common-sense gun laws, address our climate crisis, and fight for housing that’s affordable,” said Sara Jacobs. “Right now, Donald Trump is tearing this nation apart. I’m proud that it seems San Diegans stood firmly against Donald Trump’s divisive agenda at the polls and made sure this seat will stay in Democratic hands.”

“I’m thrilled to be advancing to the runoff.  As a community organizer, MTS chair, and City Council President, I have a proven record of creating change.  I’ve been a strong progressive voice in San Diego and that’s the kind of Congressmember I’ll be.

“Congratulations to Janessa Goldbeck and all the other candidates who ran exciting campaigns that engaged new voters in the primary and I welcome them to join our campaign.

There are thousands of votes yet to be counted. Given our grassroots campaign to turn out the vote, I believe that we will be in the runoff when every vote is counted.”