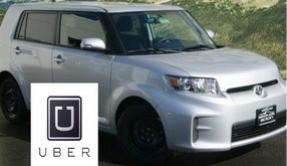 Detectives are trying to determine if this was an isolated incident or if there could be other victims. Sanchez, a Hispanic man, is 5 feet 7 inches tall with wavy brown hair. He drives a silver 2012 Scion XB (similar to the one in this photo)

According to Lieutenant Rob Ransweiler, Sanchez was on duty in his official capacity for Uber when the crime occurred. He added that Uber has been fully cooperating with the investigation and immediately suspended the suspect, who has not been allowed to drive for the company since then.

ECPD served search warrants on the suspect’s residence, as well as his vehicle, as part of this investigation. Detectives have been investigating this case with the assistance of the San Diego District Attorney’s office.  An arrest warrant was obtained and the suspect was taken into custody at the El Cajon Police Department yesterday.

If you have information about this incident, or other incidents with this suspect, you are encouraged to contact the El Cajon Police Department at (619) 579-3311. Individuals with information on this crime who wish to remain anonymous can contact Crime Stoppers Tip Line at (888) 580-8477.