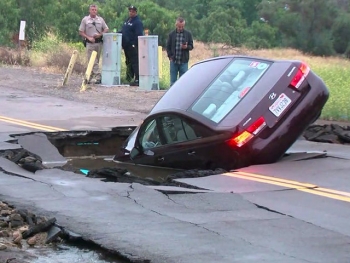 May 30, 2017 (San Diego’s East County) – An Uber driver and passenger had an unexpectedly rough ride when a broken water main shortly before dawn caused a sinkhole to open up on Pecan  Park Lane at Olde Highway 80 in unincorporated El Cajon, just east of Lake Jennings Park Road.

According to 10 News, crews responding to a report of the broken water main found  the vehicle in a huge sink hole that had formed.

Fortunately both the driver and passenger escaped safely.  According to KUSI news, the driver’s wife said the Uber driver’s back is hurting after the freak accident.

Pecan Lane is closed in both directions indefinitely until the damage can be repaired.