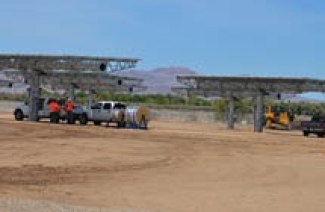 October 20, 2015 (San Diego’s East County) –  Increasingly, San Diegans are drawing power from large desert solar facilities built in Imperial County, with similar facilities slated for the farthest east portions of our County in Boulevard and Jacumba.  The projects are being pushed forward to help meet California’s ambitious goal to have 40% of electricity from renewables by 2030 under a new law approved by Governor Jerry Brown.

But now a new study by the University of California, Berkeley finds that reliance on remote solar projects creates environmental problems.

Nearly all–85%–of the utility-scale solar energy installations in California have been built in formerly natural environments far away from the urban areas served, many near environmentally protected areas or agricultural lands.  The study found that 85% of our state’s utility-scale solar projects are on sites deemed “incompatible” by standards of the Carnegie Energy and Environmental Compatibility model.

Locally, rural residents have also complained about depletion of groundwater resources by construction of the massive sites, as well as fire hazards and loss of rural character.