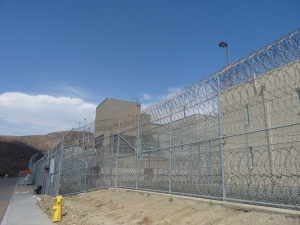 Photo: A private detention facility run by Corrections Corporation of America at Otay Mesa for U.S. Immigrations and Customs Enforcement.

December 26, 2015 (San Diego) – The University of California has divested over $25 million of its holdings in private prison corporations, in response to a resolution by the Afrikans Black Coalition, a student advocacy group.

“The goals of the private prison industry are to profit from the incarceration, labor and rehabilitative treatment of black and immigrant lives,” said Kamilah Moore, organizer with the coalition.  In an e-mail statement, she added  that by selling the shares, the UC system has sent a message that it is “against human rights abuses,” the Daily Bruin reports.

The rise of private prisons in modern times began in 1984 and has mushroomed since then. According to the U.S. Justice Department, by 2013, private prisons were housing 19.1% of all federal prisoners and 6.8% of state prisoners, reaping billions of dollars in revenues.  Private prison corporations also operate immigrant detention facilities, with over 23,000 immigrants currently behind bars. But serious questions have been raised about both racial injustice and failure to live up to promised cost savings.

Opponents claim private prisons amount to modern forms of slavery.  A UC Berkeley study found private prisons have a higher percentage of minority inmates than public prisons.  Nationwide, more black men are in correctional facilities today than were enslaved before the Civil War.  Almost 40% of all prisoners in the U.S. today are black, though black Americans make up only 13% of the population.

But many of the advantages touted by supporters of private prison systems have been shown to be false or at best, highly questionable.

Advocates of private prisons claimed they would save states and the federal government money.  But a study by the U.S. Bureau of Justice statistics found those cost savings “have simply not materialized.”

The American Civil Liberties Union conducted a study which found private prisons to be more costly, more violent and less accountable than public prisons, actually contributing to the increase in mass incarcerations. Private prisons tend to reject prisoners who would cost the most to house.

Moreover, any cost “savings” has sometimes come through cutting security, sometimes with disastrous results.  Escapees from a prison in Arizona went on a violent spree that included a shootout with police as well as kidnapping and murder of a vacationing couple. One nationwide wide study found assaults on guards by inmates were 49 percent more frequent in private prisons than in government-run prisons, while assaults on fellow inmates occurred 65 percent more often.

The U.S. currently has the highest number of people in prison of any nation on earth.  Although violent crime has dropped 20% since 1991, the number of people incarcerated has grown 50 percent, a study on the Prison Industrial Complex has found.

Companies that operate private prisons, such as Corrections Corporation of America, the GEO Group and Management and  Training Corp. have spent at least $45 million on campaign donations and lobbyists in the past 10 years in what has become known as the prison-industrial complex. These private prison corporations have made hefty donations to organizations such as the American Legislative Counsel, or ALEC, which has advocated for state legislatures to adopt legislation to imprison more people, such as the three strikes law in California.

One private prison operator of juvenile facilities, Mid-Atlantic Youth Services Corp, was found guilty in a corruption scandal of paying two judges $2.8  million to send 2,000 children to their facilities for crimes such as trespassing in vacant buildings and stealing DVDs from Wal-Mart.

In the past three decades, California has built over 20 prisons, but only two University of California campuses and one California State University.  While state spending on prisons has skyrocketed 436% since 1980, investment in higher education has been slashed by 13%.

U.C. is not the first educational institution to divest from private prison corporations.  Columbia University did so in June, in response to a student campaign and protest, the Los Angeles Times reports.

Corrections Corporation of America once built a prison in California without even having a contract with the state; a CCA official was infamously quoted as stating, “If we build it, they will come.”

Some states have taken action to rein in private prison operators. Illinois has outlawed outsourcing to private prisons completely. North Dakota outlawed exporting prisoners out of state and New Mexico passed a law to transfer supervision of private prisons back to the state secretary of Corrections, requiring private prisons to meet the same standards as public ones.

Major religious groups have called for a halt to building private prisons, including the United Methodist Church, the Presbyterian Church USA and the Catholic Bishops of the South.

Anthony Williams, prison divestment communications director for the Afrikan Black Coalition, applauds the U.C. action. “This decision is not just important for black people, as private prisons especially target communities of color,” he states, the L.A. Times reported.  Williams concludes, “But they also target low-income earning members of the community. It is not just a race issue, but a human rights issue.”

... that it is against human rights abuses? Not really......UC Office of the President (UCOP) Director of Media Relations Dianne Klein: “We see the issue of private prisons as: Is that really sustainable? Is that going to make us money in the long term? And we don’t think so for these social reasons,” Klein said. “From a risk perspective, it didn’t make sense to hold on to these assets.”--here ... It's about money, not human rights.