Raised in a jungle in war-torn Uganda, Nathanael now struggles to adapt to the American lifestyle in an urban jungle in City Heights 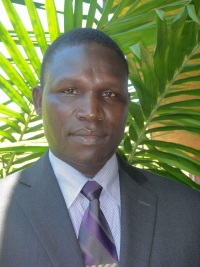 July 12, 2010 (San Diego) -- A member of the Acholi tribe in northern Uganda and a resident in an African refugee camp for 12 years, James Nathanael came to the United States with high hopes and great expectations.

He left his home and tribe in Northern Uganda in 1986 because of ongoing wars in his area. “There was a lot of killing,” he recalls. “I had to leave the country due to fear.” He lived a fulfilling but simple life as a student and a farmer prior to these wars. But the danger that surrounded him drove him from the life he knew and loved.

Now 43 years old and living in a modest apartment in City Heights, Nathanael recalls his trials and tribulations on the way to the U.S. as well as upon arrival, and now.

“In Africa, they used to tell us the U.S. is a good place--paradise…They tell you that you will have free housing and that the government will take care of you. But that is not so,” says Nathanael, who now lives in City Heights.

For many like Nathanael, the trip to the U.S. as a refugee is not simple or short. It is quite the opposite. After living in a refugee camp in Uganda for 12 years, Nathanael left for Sudan, only to find more fighting there. From Sudan he continued on to Egypt. In Egypt he was able to apply for refugee status, and after two and a half years his relocation was granted.

Nathanael experienced much of his life in refugee camps, where he applied his education degree teaching refugee children. “In the camp, you are given a tent. You cut grass and build your own hut house,” he recalled.

He was married at one of the refugee camps and soon had four children. However, his family fell apart after he came to the United States.

Initially, the U.S. refused to recognize his traditional African marriage, in which a betrothed couple speaks words to each other without official documents. Eventually, Nathanael found a way to bring his wife and children to the U.S., arriving in Kansas in December 2005. Jobs were not readily available for Nathanael and money became a family issue. The language and his unfamiliarity with the city also proved challenging, as well as limited government support. (The federal government offers eight months of financial assistance to refugee families and has recently slashed federal aid for single refugees to just one month.)

Unable to teach in the U.S. due to credentialing requirements different from Africa, Nathanael managed to get a job in housekeeping at a local hotel for six months.

The struggle for money drove a wedge between husband and wife. In Africa, a man is expected to support his family, said Nathanael, whose wife deserted him, taking their now five children with her. “She just left one day while I was at work,” he said in a solemn tone, pain evident in his eyes.

Shortly after his family left him, Nathanael came to San Diego, where he knew some people “so I wouldn’t have to be alone,” he explained.

He has worked as a pharmacy technician, for an insurance company, and as a case manager in the resettlement department at Alliance for African Assistance. But months ago, he was laid off and is still looking for work. “I have no money,” says Nathanael, adding that he will take “any entry level job I can do.” He is also taking medical specialty classes in hopes of getting a job in a medical field.

Nathanael, who speaks several languages, has also helped other recently arrived refugees with translation and transportation. Many refugees do not know the language and cite it as their biggest challenge. He formed the group Acholi of Northern Uganda to bring together and support those who came from his homeland.  He also provides translating services for Invisible Children, a San Diego-based relief organization that assists youths in his homeland, where many Ugandan youngsters have been forced to become child soldiers.  (A relief worker for Invisible Children, Nate Henn, was killed yesterday in the World Cup bombings in Uganda, highlighting the continuing.)

“I came from a very remote area,” he says when asked about his childhood. “We needed to walk two or three hours every day, barefoot in the jungle…In school, they would teach under a tree.” There were no hospitals, he added, though there were plenty of dangers. “There are mosquitos and animals…Snakes can kill you.” Amid the unrest, animals weren’t the only hazards. “People can come in your home and kill you,” he recalled.

After he left Uganda, rebel forces pressured young children to become soldiers, sometimes resorting to abductions. “That’s why we formed our group, to help people back home and convince them not to join rebel forces,” Nathanael revealed. He believes that helping to build schools and hospitals in Uganda will offer people hope and encourage them not to go to war.

Here, he continues struggling to adapt even as he helps others. “There are conflicts with my culture,” he says, noting that even the foods are different. “Refugees suffered back in their countries and when they come here, they suffer more,” he observed. “When a refugee comes here, everything you make goes to pay bills…nothing is left.”

He has not seen his parents since 1986, when he left his homeland. His father died in 2003. “I miss my home country,” says Nathanael, adding that he can’t get papers to go back for a visit, nor can he bring his mother here, which would require a lot of money and papers.

Here in San Diego, he finds solace in connecting with others from his homeland.

“When you lose your culture, you lose your life,” concludes Nathanael, who holds out hope for his children, now living in Minnesota. “I’m 43 years old. I can’t catch up with the culture easily. It will take a generation.”

This story is part of an ongoing "Refugee Voices" series published by East County Magazine.