It may surprise you to learn that San Diego County is home to more small farms (under 10 acres) than any other county in America.  Some are generations old, while others are new businesses sprouting up in the fertile soils of our sunny inland regions. 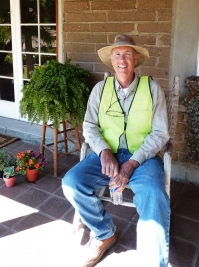 My first stop was at the Monte Vista Ranch in Pauma Valley, where rancher Warren Lyall gave us the tour.  The ranch grows primarily Valencia oranges, along with other citrus fruits and avocados. Each guest took home a bag of avocados as tasty souvenirs.

Solar panels help power the farming operations, producing 1 megawatt (MW) hour of electricty per day--enought to power 70 homes--saving the Lyall family $80,000 a year, according to the company's brochure.  Currently, the ranch sells its oranges primarily to southeast Asia, where the climate keeps oranges green year-round, thus demand is high for California citrus.

“My grandparents moved here in the early ‘30s,” said Warren Lyall, pausing outside an old adobe home that his grandparents built in the 1940s.  Today, a third and fourth generation of the Lyall family pitch in to help out. His son drove the tractor ride and a young 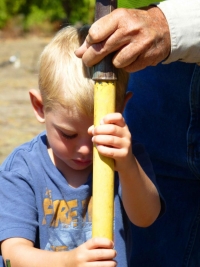 grandson helped plant a new orange tree seedling. Buds from one variety of citrus are grafted onto the trunk of another tree.

The Lyalls are planting new hardier varieties of citrus that are resistant to  the dreaded Huanglongbing (HLB), or citrus greening, a fatal citrus bacterial disease carried by the Asian citrus psyllid.  Symptoms include  greening of citrus, twisted leaves and deformed fruits.

“It has taken out  40 percent of Florida’s citrus,” Lyall said of the disease.

So far, only one infested tree has been found in California (a pomelo tree in Hacienda Heights 20 miles east of Los Angeles).   Thus the family has chosen to allow an old grove to die out, replacing it with citrus varieties that are disease resistant and that can be harvested in May and June.

It will take ten years before Lyall will know how much fruit the new varieties will yield. 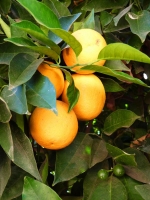 “It’s kind of an experiment, “ he reflects, “but that’s what farming is.”

Next up came a stop at a food truck (www.MihoCastroTruck.com)   set up in a field, where foods cooked from local farms was served up.  I sampled such adventurous fare as a squash blossom quesadilla and a “Sloppy Thai” burger, as well as watermelon-jalapeno juice.

Seated beneath the shade of an oak tree at a picnic table, I chatted with other farm tour goers, including a couple from an urban area in Los Angeles who said they came out with their young son because they enjoy getting out in the countryside and visiting farms. Others came to learn more about agriculture, from backyard vegetable growers to would-be farmers. 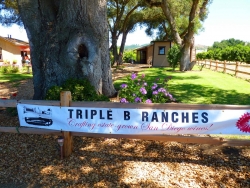 After lunch, I visited the Triple B Ranch in Valley Center, home of the Vesper Vineyards www.vespervineyard.com. Run by the Broomell family, the ranch started in 1947 in Pauma and moved to Valley Center in the 1950s.

Chris Broomell persuaded his parents to plant a vineyard in 1997—with advice from his grandfather, a winemaker in Australia. Alysha Stehly, who majored in Viticulture and Enology at the University of California, Davis, has brought her scientific knowledge to Vesper's winemaking. 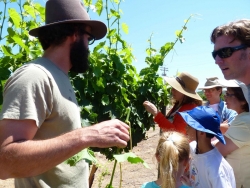 In 2008 I submitted by business plan and we expanded the vineyard,” he said.  But in 2009, 50 percent of the crop succumbed to Pearson’s disease.

Today, the vineyard grows several varieties of grapes such as merlot and cabernet, with plans to add a petit syrah and other varieties soon.  Netting protects grapes from birds.

Extensive hand labor is required to prune and maintain the vines.

“Each vine is touched 10 times by somebody’s hands,” Broomell says, as he shows tour-goers details of how to care for the vines to maximize yields. 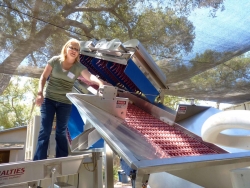 One key advantage of growing grapes is the minimal water required.  “Last summer it was cool; we never needed water,” Broomell said, noting that grapes use only a small fraction of the water amounts needed for citrus trees. 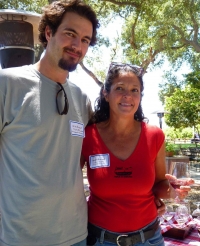 wines and whites, such as Vermantino.

The tour included the grape press, where we learned such new vocabulary words as MOG “material other than grapes” and jacks, the green stems  that are separated out.  White grapes are pressed immediately, while red grapes  are aged, allowing yeasts to ferment and add complexity and aroma.

Wines are aged in French oak barrels, which cost $800-$900 euros apiece to purchase, then bottled under the Vesper Vineyards label.

To make a bottle of red wine takes seven years, including cellaring to age the wines “and that’s if you don’t make any mistakes,” quips Broomell, savoring the fruits of his labors along with tour guests sipping wine. 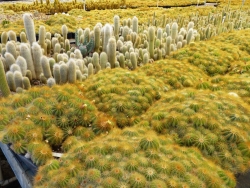 The third farm, Altman Plants http://www.altmanplants.com/ , specializing in growing succulents.  Started as a backyard mail-order business, the farm now covers 20 acres and includes thousands of cacti and other succulents, including many colorful and unusual varieties.

Succulents can be described based on their appearances, with terms such as “geometric,” “architectural” and “sculptural.”  Easy to grow even for brown-thumbed gardeners, they also serve a practical purpose asa wildfire barrier, due to high moisture content. 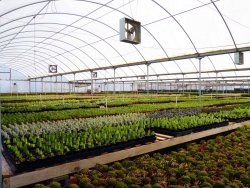 Free with any purchase, a glossy color booklet by Ken Altman titled At Home with Succulents offers tips for the care and 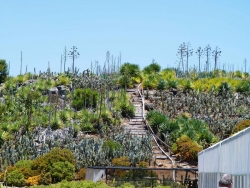 You’ll also find photos of varieties such as the colorful Valentine Plant , Echeveria Black Prince, or the soft-lit yet prickly Silver Torch. Some “mimicry” plants even resemble other objects, such as Stone Faces that look like rocks, or the String of Pearls with pearl-shaped leaves strung on eve-growing stems. 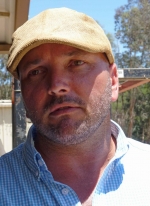 .net , proved a highlight for kids and the young at heart. 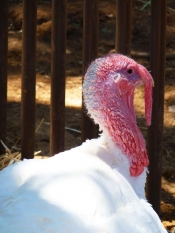 A brochure pledges that the birds are raised on “the finest grains, vegetables from our garden and forage in large oak-shaded pastures” before sale for  holiday dinner tables.

The farm also raises other livestock including chickens, beef, pork, lamb and goat—all of which can be purchased at premium pricing directly from the farm. 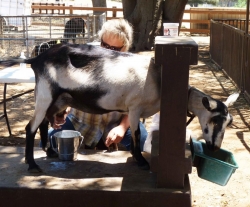 The tour included a goat-milking demonstration and a tour of the pig barn, where guests squealed with delight to pet some new arrivals—piglets being raised on thegoat’s milk after the mother sow died.  Other farm animals were also on display.

Farm fresh foods, such as fried chicken and yogurt made from goat’s milk, was served up free to guests.

Local 4H students were on hand, along with volunteers from the TERI program, which helps people with developmental disabilities 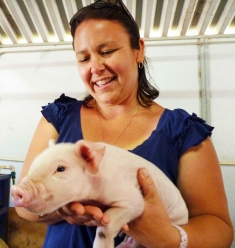 such as autism.  Recently, TERI started its own livestock program, raising pork, eggs, and organic vegetables to feed residents in group homes . The program also helps teach residents self-sufficiency, and enables the home to be less dependent on the government for funding in today’s era of budget cuts, a volunteer explained.

Ford praised the tour’s sponsor the help it offers to local farmers.

“The Farm Bureau has been great for us,” he said, praising the organization for lobbying and legislative efforts “to really help small family farms.”