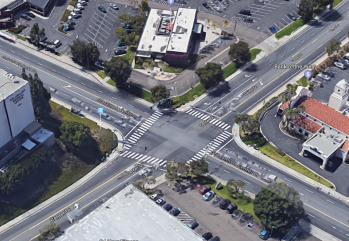 The individual was described as a white man in his 30s, wearing a black hat, gray button-down shirt and dark pants.

The Sheriff’s Department assisted La Mesa Police in searching the area.   According to Sergeant Katy Lynch, three people matching the description were detained, but none were found to have a gun on them.  “One had a prior warrant and was taken into custody,” Sergeant Katy Lynch told East County Magazine.

She confirmed that the gun was reported to be a handgun.  Openly carrying a handgun is illegal in California.

A message from MACQUEEN MIDDLE SCHOOL Dear JMMS Families, On the evening of Monday, April 2, the Alpine Sheriff's Department received information from a number of concerned parents about a social media message and image posted by a JMMS student. There was a threatening message and image of a gun. The student was quickly identified, arrested by San Diego County Deputies, and booked into Juvenile Hall. To reassure that we have a safe and secure campus, you may notice extra police presence on our campus when you return from spring break. Deputies will be on campus. This has already been investigated by Deputies, however, they will provide extra support for our campus and ensure our students and staff feel safe. They are also following up on any new concerns as a result of the post. Our school day will go on as scheduled, and I will follow up with any new information as it becomes available. Karen Hohimer JMMS Principal Alpine Union School District